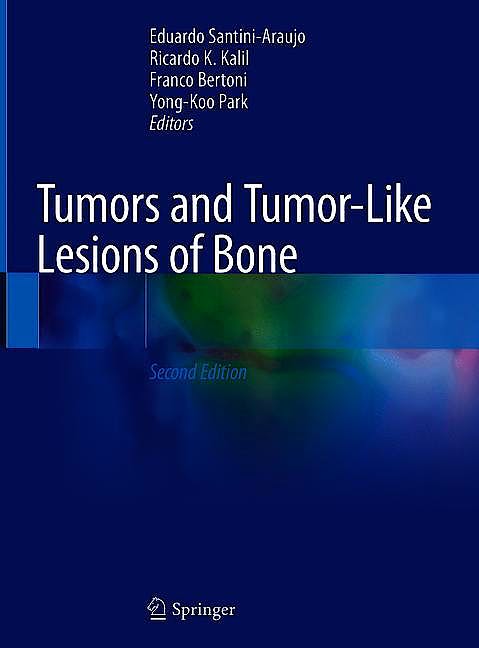 Tumors and Tumor-Like Lesions of Bone

This updated second edition of a successful book provides essential, internationally applicable information in the area of bone and joint pathology with emphasis on practical diagnostic aspects, including many illustrations: roentgenograms, CT-scans, MRI, scintigraphies, as well as pictures of gross surgical specimens and microphotographs, immunohistochemical reactions and genomics. Information on histopathological and molecular diagnosis, and basic therapeutic guidelines are provided.

This book offers generous coverage of epidemiology, clinical features, radiology, pathology, differential diagnosis, prognosis and treatment, not only for common lesions, but also for those less frequently encountered. Clues in the images and histopathology needed to arrive at a sharp differential diagnosis are discussed. The content is arranged based on the World Health Organization's Consensus Classification, with the addition of other lesions not included therein.

EDUARDO SANTINI-ARAUJO, MD, PhD
Dr. Eduardo Santini-Araujo gained his medical degree in 1973, at the Medical School of the University of Buenos Aires, Argentina, and got his certificate in Pathology after Medical Residency in Buenos Aires, Argentina. He is a specialist in Orthopaedics and Traumatology certified by the Argentine Society of Orthopaedia. In 1978, while working as fellow of the Orthopaedic Society, he started his work with his mentor Prof. Dr Fritz Schajowicz. He worked also with Dr Steven Teitelbaum at the Jewish Hospital of Washington University, St Louis Missouri and with Prof Franz Enzinger in the Armed Forces Institute of Pathology Washington DC. Since 1978 he has worked with Prof Romulo L Cabrini as Associate Researcher in the Department of Radiobiology of the National Atomic Energy Commission, Buenos Aires and as fellow of the National Council of Scientific and Technologic Research. He acted as Chair of the Department of Pathology of the HGRL 601 Central Army Hospital, Buenos Aires and is Chair Professor of the Department of Pathology of the School of Medicine and Associate Professor in the Department of Pathology of the Dentistry School of the University of Buenos Aires.
He has been an Active Member of the International Skeletal Society since 1993 and of the International Academy of Pathology since 1975. He is currently President of the International Academy of Pathology. He was a member of the WHO working group that established the Classification of Tumors of Soft Tissue and Bone in 2002 and also of the group that revised it in 2013. He has given many presentations during his professional life, in several countries, including Argentina, Uruguay, Brazil, Chile, Bolivia, Cuba, Germany, Spain, Mexico, USA, Italy, Hungary, Greece, Japan, South Korea, South Africa and others.

RICARDO K. KALIL, MD
Dr. Ricardo K. Kalil got his medical degree in 1969, at the Medical School of the Federal University of Pelotas, Brazil, and got his certificate in Pathology after Medical Residency in Brasilia, Brazil, 1972, from the Brazilian Society of Pathology.
Several great mentors have contributed to his specialization in orthopedic pathology, fellowships and stages in a traveling fellowship during the year of 1974 - in Britain, H. Sissons at the RNOH, London, C.H. Godfrey-Price, Bristol, Mary Catto, Glasgow; in the USA, Crawford J. Campbell, Albany, NY, William F. Enneking, Gainesville, FLA. In 1994 - Krishnan K. Unni, Rochester, MN, USA.
He acted as head of the Pathology Laboratories of the Sarah Network of Rehabilitation Hospitals in Brazil, from 1974 to 2013, a full-time job of 40 years, where many young pathologists were instructed in orthopedic pathology. In the same institution, he served during some time in the last years, as member of the ethical committee and as medical director.
He was a member of the WHO working group that established the Classification of Tumors of Soft Tissue and Bone in 2002 and also of the group that revised it in 2013, having authored two chapters in each edition.
He is now consultant in orthopedic pathology at the Laboratory of Orthopedic Pathology, Buenos Aires, Argentina, and at the Department of Pathology of the A.C.Camargo Cancer Center, Sao Paulo, Brazil.
He is a member of the International Skeletal Society since 2003, where he served as member of the executive committee for two years, and of the International Academy of Pathology since 1974.

FRANCO BERTONI, MD
Franco Bertoni has been Associate Professor, University of Bologna, Italy, Senior Consultant of the Surgical Pathology Department, Istituto Rizzoli, Bologna, Italy and is currently Consultant of Surgical Pathology, Villa Erbosa Hospital, Bologna Italy.
He gained his medical degree from the University of Bologna, Italy in 1967 and has spent one month every year in the Surgical Pathology Department of the Mayo Clinic, Rochester, USA, working in the field of bone tumors, beginning in 1977 with Dave Dahlin, then with KK. Unni and until now with Dr. Carrie Inwards. He worked in Gainesville Florida for one academic year as visiting professor working with Prof. William Enneking on the field of bone tumors (1983-1984) and published nine articles in that period. He was a member of the WHO working group for the Classification of Tumors of Soft Tissue and bone in 2002.
He was invited speaker in many meetings in several countries including USA, Brazil, Argentina, Guatemala, Europe, Japan, Thailand, South Korea and others, and has published 465 papers.

YONG-KOO PARK, MD, PhD
Yong-Koo Park was born in Seoul, Korea and he finished his medical school in Seoul. After he finished his PhD degree in Kyung Hee Graduate School he went to the Mayo Clinic, Rochester, MN. At Mayo Clinic, he studied bone and soft tissue pathology under the great mentor Dr. Unni KK. He became a member of International Skeletal Society in 1996.
He has published more than 250 papers in peer reviewed journals and he also served two years as an editor in Skeletal Radiology. Now he is an editor of Human Pathology journal. He also presented many cases and research papers in international conferences, such as International Skeletal Society, International Academy of Pathology, and US-Canadian Anatomic Pathology meeting.
He wrote three chapters in WHO Classification of Tumors of Soft Tissue and Bone, and Practical Orthopedic Pathology.