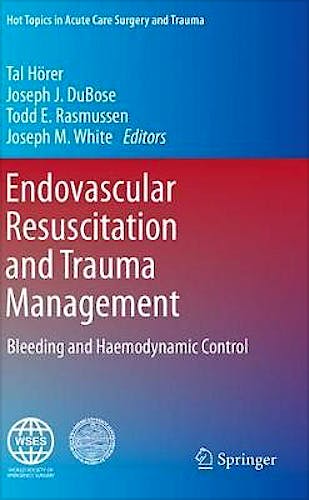 This book focuses on endovascular methods for resuscitation and trauma management. Written by highly qualified and clinically active physicians from around the world, it shares information gathered over the past decade, providing a comprehensive database of clinical knowledge for a wide range of practicing clinicians and researchers. Moreover, it describes basic methods for vascular access, methods for REBOA (Resuscitative Endovascular Balloon Occlusion of the Aorta), endo-grafts and embolization methods, as well as other, more advanced methods for endovascular and hybrid resuscitation (CPR REBOA, ECHMO etc.) from the pre-hospital to the post-surgical phase. As the body of literature in this field has grown considerably over the past five years, the book also focuses on summarizing what is known, what the clinical and research evidence is, and "how to actually use" the various methods. It will help readers understand basic and advanced modern techniques for bleeding control and modern resuscitation, and how to apply them in clinical practice.

Tal Hoerer, MD PhD, works as a vascular surgeon in Sweden. He is an Associate Professor of Surgery at OErebro University Hospital, where he is responsible for the surgical and vascular residency program. Former military and reserve IDF, his major interests are in clinical research on advanced endovascular and hybrid methods for bleeding control, and in trauma and resuscitation. He is Primary investigator for several studies including the ABOTrauma Registry and works on educations matters and hands-on training. He is a firm believer in REBOA (for correct indications) and EVTM. Todd E. Rasmussen, MD, FACS is a Colonel USAF MC, Director of the DoD Combat Casualty Care Research Program in Fort Detrick, Maryland, and a Professor of Surgery at the Uniformed Service University. Further, he currently operates as a surgeon at the Veterans Administration Medical Center in Baltimore. He began his surgical training at Wilford Hall Medical Center on Lackland Air Force Base and completed his training in vascular surgery back at Mayo. He was assigned to the National Capital Area two months before 9/11/2001 and after September 11th began caring for the first of the injured returning from Afghanistan at Walter Reed Army Medical Center in Washington. Then he initiated a vascular injury and hemorrhage control research and innovation program. His research efforts have resulted in 130 publications, 25 book chapters, 2 textbooks and 4 patents. Colonel Rasmussen served as Deputy Commander of the Army's Institute of Surgical Research in San Antonio and was subsequently assigned to direct the broader DoD Combat Casualty Care Research Program at Fort Detrick. His awards include the Gold Headed Cane for outstanding clinical and academic practice and the Baron Dominique Jean Larrey Award for Excellence in Military Surgery. In 2015 Colonel Rasmussen was recognized as a Hero in Military Medicine by the Center for Public-Private Partnerships.

Joseph J. DuBose, MD FAC FCCM, is a vascular and trauma surgeon with the United States Air Force, presently stationed at Travis Air Force Base in Northern California, USA. He presently serves as the Secretary of the Aortic Trauma Foundation and as Primary Investigator of the American Association for the Surgery of Trauma's (AAST's) Aortic Occlusion in Trauma and Acute Care Surgery (AORTA) Registry, as well as the PROspective Observational Vascular Injury Treatment (PROOVIT) Registry. He is an Associate Professor of Surgery at the Uniformed Services University of the Health Sciences and the University of California - Davis.