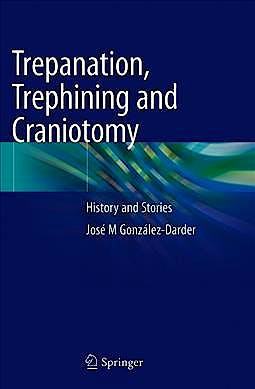 This book takes readers on a journey around the world and through time, accompanied by a modern neurosurgeon who reviews historical techniques and instruments used for cranial opening. The author draws on original medical and surgical books to provide a comprehensive history of these techniques and tools.

To complement the general overview and offer readers a more `hands-on' sense of context and atmosphere, extensive historical references, stories, media news and illustrative cases have been included for each historical and geographical scenario. In addition, original illustrations and plates of these archaic instruments and techniques are supplied.

Neurosurgical surgeons, nurses, technicians, medical historiographers, paleo-pathologists and researchers interested in surgical techniques for cranial opening will find the volume a valuable guide, intended to increase the historical and cultural awareness of this core topic in neurological surgery.

Dr. Gonzalez- Darder received his medical degree in Medicine and Surgery from the Medical School of the Literary University ofValencia in 1977 and completed his training as neurosurgeon in the Hospital Clinico Universitario de Valencia in 1982.

He held the highest honors in the M.D. and Ph.D. degree exams and was admitted as Membership of the Academy of Medicine ofValencia. From 1982 to 1992, he held a position as Neurosurgeon and Professor of Neurosurgery in the Hospital and MedicalSchool of Medicine of the University of Cadiz. He was director of the Investigation Group 3080 of the Junta de Andalucia, Vice-Deanof the Medical School and Head of the Central Service of Investigation of the University of Cadiz.

He is author and coauthor of more than 100 peer-reviewed papers and three books, he was accredited as Chairman in the Health Science Area by the Ministry of Education of the Spanish Government in 2013.