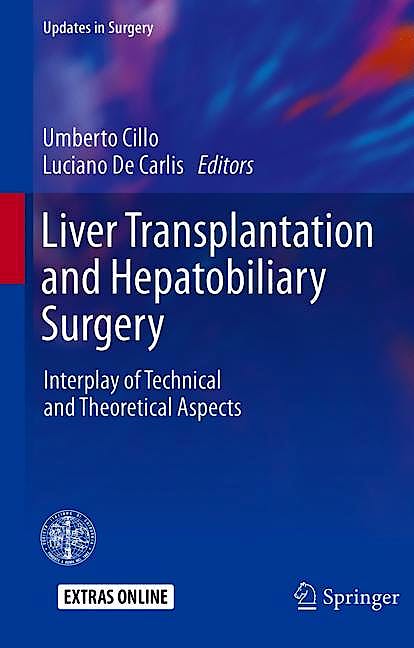 In the past, liver resections and liver transplantations were performed by different surgical teams, with very little interplay between the two. However, the evolution toward more complex operations called for an increasingly intense interaction between these surgical techniques: split liver and living donor liver transplantation have become popular in the transplant community, utilizing the Coinaud segmental anatomy in a very sophisticated way, while portal and arterial resection and reconstruction have become indispensable methods for treating Klatskin tumors infiltrating the hepatic hilum.

This book offers a complete overview of the connections between liver transplantation and hepatobiliary surgery. It focuses on ex situ techniques for resection of tumors at the suprahepatic confluence, with or without venous reconstruction, and on total vascular exclusion of the liver with the aid of a venovenous bypass that should be a surgical option for referral centers in hepatopancreatobiliary surgery. By taking into consideration the development of minimally invasive liver surgery, it will introduce readers to a variety of new perspectives such as: vascular exclusion techniques with or without extracorporeal circulation, hemodynamic implications and lessons learned from liver transplant surgery, and technical details on pediatric transplantation and its informative role in modern biliary tract surgery.

Luciano De Carlis is Professor of General Surgery at the University of Milano-Bicocca School of Medicine, Director of the Department of Surgery and Chief of the Abdominal Transplant Program at Niguarda Hospital, Milan, Italy. He studied in Milan and trained in Pittsburgh (USA), Essen (Germany), Tokyo and Kyoto (Japan). He has performed, as first surgeon, more than 5000 major operations in the field of General Surgery with a special focus on hepatopancreatobiliary surgery, vascular surgery and transplantation (liver, kidney and pancreas) and more than 8000 operations were performed in Niguarda Hospital under his direction. In 2001 he performed the first adult-to-adult living donor liver transplantation in Italy, and his Center is at the forefront of this field, with more than 100 cases operated on. He is a pioneer in combined organ transplantation performing the first liver and pancreas transplantation in italy in 2009.In 2015 he performed the first liver transplantation from a deceased heart donor in Italy and promoted this program despite the legal hurdle requiring 20 minutes of cardiac arrest for a declaration of death. He was Chairman and Invited Speaker in more than 300 national and international Congresses in General and transplantation Surgery. His scientific output includes over 230 papers in national and international peer-reviewed journals and books (Total Impact 873.2; H INDEX 31 -Scopus- 32 -Google Scholar-; Total Number of Citations 4709).. He is a member of the Italian Society for Organ Transplantation (SITO), European Society for Organ Transplantation (ESOT), International Society of Transplantation, and Italian Society of Surgery (SIS) and Italian Association of Hospital Surgeons (ACOI).

Umberto Cillo is Professor of General Surgery and Director of the Hepatobiliary Surgery and Liver Transplant Unit at the University of Padua, Italy. A specialist in Emergency Surgery, he was a Research Associate in Transplantation at the University of Pittsburgh-School of Medicine from 1990 to 1992 and subsequently a Researcher in Italy, where he was appointed as Associate Professor and later Full Professor of General Surgery at the University of Padua. Since 2004 he has performed as first practitioner over 550 liver transplantations including over 90 pediatric, adult-to-child, and adult-to-adult split transplants, living donor transplants, and autotransplants, as well as over 700 liver resections. Since 2011 to 2015 he coordinated the liver allocation remodeling in Italy through a process including four methodologically stringent consensus conferences and a public appraisal. He is author or co-author of 135 peer-reviewed publications. He is President of the Italian Society for Organ Transplantation (SITO), a member of the Council of European Society for Organ Transplantation (ESOT), and a member of Italian Society of Surgery.