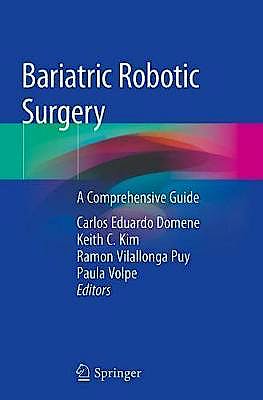 The present book intends to provide a comprehensive guide to the field of robotic bariatric surgery. It covers all the stages and procedures needed to fulfill credentialing for performing robotic surgery. Also, robotic surgery is presented as an institutional program, and we describe how to establish a robotic program in a hospital environment. The currently accepted and most common procedures - sleeve gastrectomy, gastric bypass and duodenal switch - are described in detail, with a step-by-step description of the techniques, followed by a wealth of photos and videos for each case.

Special attention is given to the employment of robotic bariatric surgery in exceptional conditions, such as in super-obese patients, reoperations and revisional procedures. Critical issues, for the success of the robotic surgical interventions, such as anesthesia, are also addressed. Finally, the outcomes of robotic bariatric surgery are described, including long-term weight loss, improvement and resolution of comorbidities and improvement in quality of life. Bariatric Robotic Surgery is the first book specially devoted to this modality of surgical intervention. It is a fundamental tool for surgeons, residents and fellows who want to start a robotic bariatric surgery program. The book also helps experienced robotic surgeons to keep up to date with the various available robotic surgical techniques.

Reviews
"The primary audience is surgeons, but the book can be used by trainees for educational purposes as well. ... This is a useful book for bariatric surgeons who wish to educate themselves on robotic techniques." (Ryan Lehmann, Doody's Book Reviews, October 11, 2019)

Carlos Eduardo Domene - Degree in Medicine by University of Sao Paulo Medical School (1979); Residency in General Surgery (1980-1981); Residency in Digestive Disease Surgery (1982-1983). President of SOBRACIL (Brazilian Society of Minimally Invasive Surgery and Robotics) 2015-2016; Vice-President of SOBRACIL 2009-2010 and 2013-2014; Secretary of SOBRACIL 2011-2012. Doctor (1990) and Professor (1994) of Surgery at University of Sao Paulo Medical School. Member of ASMBS (American Society of Bariatric and Metabolic Surgery), SSAT (Society for Surgery of the Alimentary Tract); Fellow of ACS (American College of Surgeons); SAGES; SLS; IFSO; SRS (Society of Robotic Surgery); Fellow of CBC (Brazilian College of Surgeons); CBCD (Brazilian College of Digestive Surgery). Author and co-author of three books on general surgery.
Keith Kim - MD, FASMBS, Medical Director for the Obesity Medicine and Surgery Institute at Florida Hospital Celebration Health. Board certified general surgeon with a focus in bariatric surgery and weight loss and is one of the most respected bariatric specialists nationally and internationally. Dr. Keith Kim has performed over 2,000 bariatric surgeries and is invited all over the globe to speak and train other surgeons on his techniques. Dr. Kim is a Fellow of the American Society for Metabolic and Bariatric Surgery and is the Co-director for the International Gastric Band Summit.Ramon Vilallonga Puy - Dr. Vilallonga is Specialist in General Surgery and Digestive Diseases (2008) and obtained his degree of competition in Morbid Obesity Surgery (SECO, 2012). He trained in advanced Laparoscopic Surgery and Robotics in the Hopital Civil de Strasbourg. Masescaux Professeur J. (2007), Celebration Hospital (Florida) (Dr. K. Kim), Hospital Da Luz (Dr. C. Vaz) Portugal, and in advanced Laparoscopic Surgery for morbid obesity at the Cleveland Clinic (Dr. Rosenthal, 2011). He worked as assistant in the Edith Cavell Chirec of Bruxelles Hospital (Belgium) as a specialist in general surgery and advanced laparoscopic surgery and morbid obesity (Dr. Himpens, 2012-2013). He has performed over 1000 bariatric procedures including robotic surgery. His areas of interest are Robotic and Laparoscopic Surgery, adrenal thyroid surgery, parathyroid, and pancreatic endocrine surgery. He is a member of different scientific societies such as Spanish Society of Surgeons (ACS), European Society of Endoscopic Surgery (EAES) Board Member of the Journal and Publishing Committee. Also member of Spanish Society of Endoscopic Surgery and SAGES. Dr. Vilallonga has published more than 75 articles in national and international journals (> 215 points IF), over 5 book chapters, 1 book and presented over 300 conference papers and multiple invited lectures in Spain, Andorra, Germany, Greece, USA, Canada, China, Italy, Sweden and South Africa among others. He has performed live surgeries Congress in countries like Belgium, United States, and Romania.