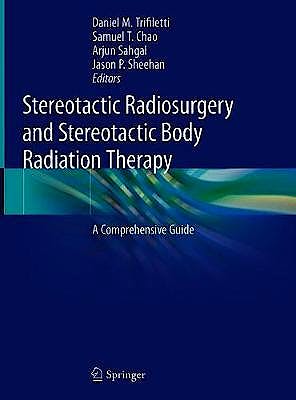 This book is a comprehensive review of stereotactic radiosurgery (SRS) and stereotactic body radiation therapy (SBRT): its physics, clinical evidence, indications, and future directions. The utilization of stereotactic radiosurgery (SRS) and stereotactic body radiation therapy (SBRT) is increasing internationally because of several factors. First, it offers patients a local treatment option that has demonstrated effectiveness similar to traditional surgery without the morbidity of general anesthesia and open surgical resection. Second, recent advancements in the quality of scientific evidence supporting a SRS or SBRT-containing approach in patients continues to evolve and demonstrate favorable disease-specific outcomes with little, if any, toxicity in various anatomic disease sites and for various conditions including cancer, benign tumors, and other psychiatric and neurologic conditions. Third, and most provocatively, is the notion that definitive local therapy (i.e. SRS or SBRT) in patients with cancer can boost the immune system to fight cancer in other sites throughout the body. While traditional medical knowledge would suggest that all patients with metastatic cancer are incurable, there is a mounting body of evidence that there is a subset of these patients that can be cured with definitive SRS or SBRT. This volume thus delves into each of these benefits and aspects of treatment, guiding physicians to the best treatment plan for their patients.

Expert, international authors provide guidelines for SRS and SBRT use by clinicians. Chapters are divided into six main sections: Radiobiology of Radiosurgery and Stereotactic Body Radiation Therapy, Intracranial Radiosurgery Technique, Intracranial Radiosurgery by Indication, Stereotactic Body Radiation Therapy Technique, Stereotactic Body Radiation Therapy by Indication, The Future of Radiosurgery and SBRT. Overall physics are explained, as well as specific considerations for particular surgical tools (including the Leksell Gamma Knife and Accuray CyberKnife), techniques (including fractionated and charged particle radiosurgery), and anatomic sites (including brain metastases, pituitary tumors, and the prostate). Detailed images and charts enhance the chapters. This book provides physicians with a single, practical resource incorporating both of these broad categories of treatment, SRS and SBRT, and better defines the current role and the direction of radiosurgery.

Daniel M. Trifiletti, MD is an Associate Professor of Radiation Oncology at The Mayo Clinic. He was won a number of awards related to his work in radiation oncology and has published extensively.

Arjun Sahgal, MD, FRCPC is an Associate Professor in the Department of Radiation Oncology and Surgery at the University of Toronto.