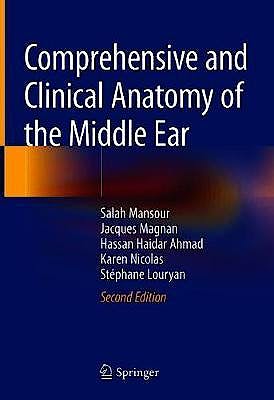 Comprehensive and Clinical Anatomy of the Middle Ear

This fully revised and expanded second edition provides a comprehensive, most up-to-date and extensive work on middle ear anatomy. Related biomechanics are explained to enhance the understanding of functional anatomy. Clinical situations are correlated to the anatomical impacts of middle ear diseases. Advanced knowledge of embryology helps to correlate anatomical status in relation to developmental anomalies. Endoscopy succeeds to demonstrate anatomical details along with their impact on surgery of the middle ear. The inclusion of carefully selected CT scans assist in the reading of normal anatomy comparing with pathological features. This work enables those undergoing surgical training to hone their surgical skills. Comprehensive and Clinical Anatomy of the Middle Ear 2nd edition is aimed at otolaryngology residents, otology and neurotology fellows, researchers, teachers and practitioners.

Prof Jacques Magnan, born in 1946, is affiliated with Hopital NORD, Marseille, France and Aix-Marseille University, France. He completed his Otolaryngology residency at Clinique CAUSSE, France in 1974, before gaining further qualifications in maxillofacial surgery and otoneurology in 1976 and 1989, respectively. He became Professor and Head of Department 1989, Director of Otologic, Neurotologic and Microendoscopic laboratory 1996 and Professor emeritus in 2010.

Adj. Prof. Karen Nicolas obtained her medical degree at the University of Munster, Germany in 1990, also from the same University her Speciality Diploma in Radiology in 1997. She worked for three years as fulltime staff in the Radiology Department of the Hospital of Tourcoing, France. During this time, she acquired the interuniversitary diploma (DIU) of "ENT and cervicofacial Imaging" at the University Bicetre, Paris. She succeeded the competition to become "Praticien Hospitalier" in February 2000 in France, but moved for family reasons to Lebanon where she became full time staff in the Radiology Department of Rizk Hospital in Beirut from 2000-2003, then part time Radiologist from 2005-2007 at the Middle East Institute of Health (MEIH) in Bsalim. Since 2007, she is fulltime staff and Head of the Radiology Department of the MEIH. Since 2010, she is active in the training program for residents from the Lebanese University. Since 2002, she has developed a continuously growing activity in ENT imaging, especially in otology, and is reading Temporal Bone Imaging in different Institutions in Lebanon. She is coauthor with ENT-colleagues in several publications and three books.

Adj. Prof. Hassan Haidar Ahmad is Lebanese and gained his medical degree at the Lebanese University in 2006. He trained for his Diploma of Microscopic and Endoscopic Surgery of the Base of Skull at Aix-Marseille University, Marseille, France from 2009 to 2011 and also received his Diploma of specialization in Otolaryngology from the Lebanese University in 2011. In 2013 he obtained his Diploma of advanced specialization in Otolaryngology (DFMS/AFS) from Aix-Marseille University, Marseille, France and also completed his Sub-specialization Fellowship (Otology - Neurotology) at Nord University Central Hospital, APHM, Marseille, France. He is currently Consultant in ENT, Head and Neck Surgery at Hamad Medical Corporation in Qatar and Assistant Professor of Clinical Otolaryngology at the Medical College of Weill Cornell University. He is also the program director of the Otology fellowship program at Hamad Medical Corporation in Qatar.

Prof. Stephane Louryan received his MD, radiology degree and PhD in morphological science from the Universite Libre de Bruxelles, Belgium. He developed computed tomography methods applied in human paleontology, and has been president of the Royal Belgian Society of Anthropology and Prehistory. Dr. Louryan is curator of the Museum of Human Anatomy and Embryology Louis Deroubaix at the Universite Libre de Bruxelles, and chairman of the Laboratory of Anatomy, Biomechanics, and Organogenesis in the same institution. He is an Ordinary Professor at the Universite Libre de Bruxelles and has been invited professor at the Faculty of Medicine of the Lebanese University. He is a member of the Royal Academy of Medicine of Belgium and the author of about 200 scientific publications and the author/editor of about 20 books.