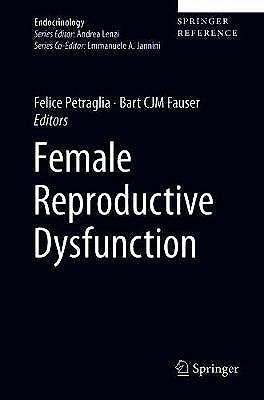 Written by leading international specialists, this book provides a comprehensive, state-of-the-art overview of endocrine-based female reproductive disorders. Particularly focusing on the Hypothalamus - Pituitary - Ovary (HPO) axis as the main driver of reproduction in women, it discusses amenorrhea; chronic anovulation and polycystic ovary syndrome as the most common dysfunctions of the HPO axis; endocrine diseases as possible impacts on the HPO axis; uterine disorders related to estrogen/progesterone; and the impact of endometriosis and uterine fibroids on reproduction. It also addresses infertility and menopause as hormone-related disorders in women and endocrine changes during pregnancy and lactation, and in breast disorders.

The book is intended as a major reference for endocrinologists, gynecologists, and obstetricians, as well as basic and clinical scientists. It is published as part of the SpringerReference program, which provides access to live editions constantly updated through a dynamic peer-review publishing process.

Prof. Petraglia is President of the Society of Endometriosis and Uterine Disorders (SEUD) and fellow ad eundem of the Royal College of Obstetricians and Gynaecologists (RCOG). He was President of the Society for Gynecologic Investigation (SGI) (2008-2009), member of the Executive Board of the International Society of Gynecological Endocrinology (ISGE), and member of the International Federation of Gynecology and Obstetrics (FIGO) and of the European Board and College of Obstetrics and Gynecology (EBCOG).

Prof. Petraglia has received the award for the best publications of the Endocrine Society (2010) and the Award of the Society Reproductive Investigation (2014).

Prof. Petraglia is author or co-author of more than 920 peer-reviewed papers in Scientific International Journals (IF: 19886, HI:69) and co-editor of 27 scientific volume

He is a Fellow ad Eundum of the Royal College of Obstetrics and Gynaecology, Honorary member of ESHRE, Night in the order of the Netherlands Lion, member of the (US) National Academy of Medicine, member of the board of the Dutch Medical Research Counsel (ZonMW), Editor in Chief of Reproductive Biomedicine Online (RBMO), and executive Board member of International Federation of Fertility Societies (IFFS).

His major research interests include the pathophysiology of human ovarian function, PCOS, POI, IVF and women's health. He has published over 450 peer-reviewed articles (Hirsch factor > 100), and his work has been widely covered in the national and international lay press.