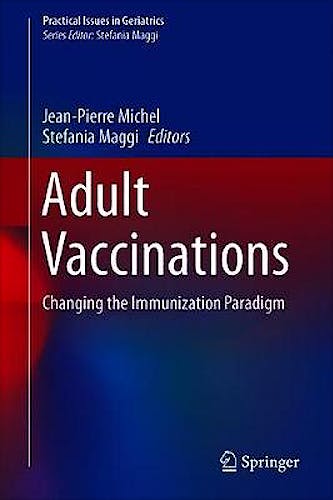 Foreword: Adult vaccinations: essential but too often forgotten1. Complexity of vaccine manufacture and supply2. Administration of vaccines: current process, new technologies, adjuvants3. How can the European Medicines Agency support an appropriate strategy of adult vaccination?4. Public health impact of adult vaccine-preventable diseases on performance, disability, mortality and health care costs in Europe5. Outcomes after HPV vaccination 6. Impact of nutrition on adult vaccination efficacy7. Profiling vaccines for an immunosenescent and multimorbid population8. Comprehensive geriatric assessment in infectious diseases9. Etiology of respiratory tract infections in adults in Europe: current knowledge and knowledge gaps10.European flu vaccine regulations and their impacts in community-dwelling adults11.Vaccination against pneumococcal disease in the European Union, with particular focus on Germany12.Direct and indirect benefits of a comprehensive approach to vaccinating adults with influenza and pneumococcal vaccines, especially in patients with chronic diseases13.Vaccination of health care professionals and protection of hospitalized adults and nursing home residents14.Ongoing threats for older Europeans: Diphtheria, Pertussis and Tetanus15.Herpes Zoster vaccination: a vaccine to prevent pain16.Gastroenteritis burden in the adult community: prospects for vaccines.17.Travel vaccination18.Integrating the veterinarian scientist to the one-health concept.19.Stressing the importance of adult immunization: suggestions for how to change the paradigm20.How can we integrate life course vaccination into the new WHO definition of "Healthy Ageing"?

After introductory chapters devoted to the safe production and distribution of vaccines, the book addresses the question of adult vaccination in the framework of a life-course approach to vaccination. It presents the proceedings of multidisciplinary expert discussions with an excellent summary of the current state of knowledge on adult vaccination in various diseases, as well as an overview of the professionals involved and the obstacles to achieving greater vaccine uptake, and how these may be addressed.

The book systematically discusses the major vaccine-preventable diseases, as well as regulatory issues in vaccine provision, and presents the results of an expert meeting designed to identify the obstacles to vaccination, and solutions for addressing these barriers. It goes on to extend the discussion beyond the traditional boundaries of human health to encompass the "one health" concept.

The book is intended for all those with an interest in vaccination, including physicians (from a wide range of disciplines including geriatrics/gerontology, infectious diseases, pediatrics, internal medicine, and other non-organ specialties), other healthcare professionals, pharmacists, representatives of the pharmaceutical industry and regulatory bodies (EMEA, national authorities), policymakers, the media and the general public.

Jean-Pierre Michel is an emeritus professor of Medicine and former head of the Academic Geriatric department (Geneva Hospitals and Medical University). He is also an honorary professor of Medicine at Limoges University (F) and Beijing University Hospital (CN), as well as adjunct professor at McGill University (Montreal - Ca). He was elected President of the European Union Geriatric Medicine Society (EUGMS) in 2012 and 2013. During the last International Association of Gerontology-World (IAGG) congress of Geriatric Medicine in Seoul (2013), he received a "World Award" for his lifelong, far-reaching achievements in Geriatric Medicine. Moreover, he is full board member of the French national Academy of Medicine and foreign member of the Royal Spanish Academy of Medicine. He is on-going WHO expert of the "Ageing and life course" program. In 2017, he was nominated by the IAGG-world executive board as director of the "Federation of Education in Geriatrics" with includes Asian, European, Latin American, South East Asian and Africa/Middle East Academies of Geriatrics. In 2018, he was elected by the "Science Advice for Policy by European Academies" (SAPEA) to be the chairman of a working group targeting the topic "Transforming the future of Ageing". He has authored over 400 articles in peer-reviewed journals, plus numerous book chapters. Prof. Michel was the first editor of the recently published third edition of the Oxford Textbook of Geriatric Medicine, which recently got a British Medical Association award and has also edited in 2018 another book entitled "Midlife prevention of diseases and age-related disability" in the series "Practical Issues in Geriatrics".

Dr. Stefania Maggi is a Geriatrician and Epidemiologist with expertise in both Clinical Geriatrics and Epidemiology of Aging. Her research focuses on the epidemiology of aging and the impact that lifelong health promotion and disease prevention programs have on healthy aging. She is a Board-Certified Geriatrician (University of Padua, Italy) and also obtained a Master's in Public Health in Epidemiology in 1987 and completed two-year postdoctoral training in Epidemiology, both at the Johns Hopkins University, in Baltimore, MD, USA. Dr. Maggi was the Coordinator of the WHO Program for Research on Aging based at NIA, NIH, Bethesda, MD, USA from 1990 to 1993. She is currently working as Research Director at the CNR Aging Branch-Institute of Neuroscience in Padua and is the Director of the CNR Project on Aging, involving 22 multidisciplinary, research centers in Italy. Since 2001, she has been a member of the Board of Directors of the American Federation for Aging (AFAR), New York, NY, US, and since 2010, Director General of the Mediterranean Diet Foundation. Dr. Maggi is Past President of the European Union Geriatric Medicine Society (EUGMS). Currently, she is a member of the Board of Directors of EUGMS and of the Italian Society of Gerontology and Geriatrics (SIGG). She has authored over 300 publications in international peer-reviewed journals and is currently the Editor-in-Chief of Aging Clinical and Experimental Research.