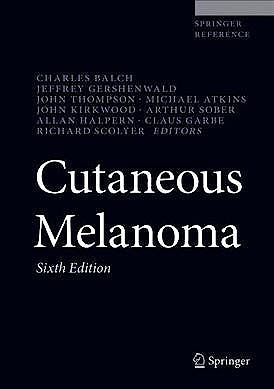 Written by the leading melanoma experts from the United States, Australia, and Europe, this new edition incorporates the clinical outcomes of more than 70,000 patients treated at major melanoma centers throughout the world and is the definitive and most authoritative textbook on melanoma used worldwide. Providing the most up-to-date and comprehensive information needed for the clinical management and scientific study of melanoma, Cutaneous Melanoma, 6th edition covers everything from precursors of melanoma to advanced stages of metastatic disease.

Dr. Charles M. Balch, M.D., FACS, Professor of Surgery, University of Texas Southwestern Medical Center, was previously Deputy Director for Clinical Trials and Outcomes Research at Johns Hopkins Institute and Executive Vice President and Chief Executive Officer of American Society of Clinical Oncology (ASCO). He has led a distinguished career as a clinical and academic oncologist for the past 35 years, as a leading authority in both melanoma and breast cancer. He has also made significant contributions to laboratory research in tumor immunology and human T lymphocyte differentiation. He is author of over 700 publications, which have been cited over 20,000 times in the biomedical literature, and has lectured in over 35 different countries in the world and most of the major academic centers in the United States. Dr. Balch is the founding Editor-in-Chief of the Annals of Surgical Oncology (Springer), which is recognized as the leading journal in the world in its field. He also held major leadership roles involving clinical research in three comprehensive cancer centers (University of Alabama at Birmingham, University of Texas M D Anderson, and the City of Hope National Medical center).