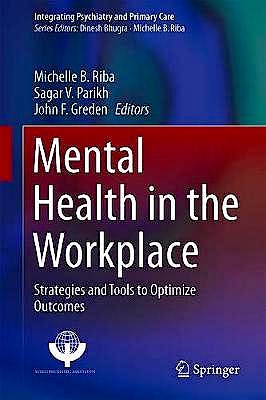 Mental Health in the Workplace. Strategies and Tools to Optimize Outcomes (Integrating Psychiatry and Primary Care)

The cost of depression at the workplace is staggering, both in terms of absenteeism and productivity loss while at work, and in terms of human and family suffering. Depression is highly prevalent and affects employees' concentration, decision-making skills and memory, contributing to accidents and quality issues. Analyses indicate that the returns on investment for workplace mental health programs are significant, with employers reporting lower productivity-related financial losses and less need staff turnover due to mental health conditions. The book also addresses substance use and misuse, and ways to address such problems.

Michelle B. Riba, M.D., M.S. is clinical professor and Associate Director of the University of Michigan Comprehensive Depression Center, and Director of the PsychOncology Program at the University of Michigan Comprehensive Cancer Center and University of Michigan Consultation-Liaison Psychiatry Fellowship Director. Dr. Riba's clinical and research interests include psychoncology and the role of screening for distress in patients with medical illness. Dr. Riba is Past President, American Psychiatric Association and has served as Secretary for Scientific Publications, World Psychiatric Association. She is currently Deputy Editor of Psychiatric Times; Editor of the Section on Complex Medical and Psychiatric Conditions for Current Psychiatry Reports; has served on the editorial boards of Psychiatric Services Academic Psychiatry; Current Psychiatry and has served on the editorial advisory board of the American Psychiatric Press, Inc. She is a reviewer for Psycho-Oncology; Academic Psychiatry; Psychiatric Services; Journal of Psychiatric Practice; and Psychosomatic Medicine; Breast Cancer Research and Treatment. She has co-edited 15 editions of The American Psychiatric Press Review of Psychiatry series. She has co-edited Psychopharmacology and Psychotherapy: A Collaborative Approach; Primary Care Psychiatry; and The Doctor-Patient Relationship in Pharmacotherapy: Improving Treatment Effectiveness and has edited or co-written over 40 books.

Sagar V. Parikh, M.D., FRCPC is appointed as the John F. Greden Professor of Depression and Clinical Neuroscience, and Professor of Psychiatry, at the University of Michigan, Ann Arbor, where he also serves as Associate Director of the Michigan Comprehensive Depression Center. He is Medical Director of the National Network of Depression Centers and Education Chair of the Canadian Network of Mood and Anxiety Treatments. He is also a Professor of Health Management and Policy in the School of Public Health at the University of Michigan, and continues as an adjunct Professor of Psychiatry at the University of Toronto, where he was on staff full- time from 1994-2015. Dr. Parikh is the author / editor of three books and nearly 200 peer-reviewed articles and book chapters, and co-author of all 10 editions (1997-2018) of CANMAT treatment guidelines for Depression and for Bipolar Disorder, the world's most cited mood disorder guidelines. Current major projects include a multi-site study of Biomarkers in Major Depression, Pharmacogenomics of Depression, Functional Remediation interventions in Bipolar Disorder, Workplace Depression interventions, School-based Depression Awareness/Prevention programs, and interventional psychiatry treatments including IV Ketamine and Transcranial Magnetic Stimulation. As medical director of Mensante, he helped create a novel internet system for recognition and management of mental disorders that is commercially marketed. Dr. Parikh was awarded the Dave Davis CEPD Research Award from the University of Toronto in 2008, the R.O. Jones Award for Best Research Paper by the Canadian Psychiatric Association in 2011, and Paula Goering Collaborative Research and Knowledge Translation Award in 2018. He serves as Secretary of the International Society for Affective Disorders, and Co-Head, Section of Affective Disorders, World Psychiatric Association. He was honored by the Canadian Psychiatric Association by delivering the Distinguished Member Lecture at the 2007 CPA Annual Meeting. His teaching has won him three local, three national, and one international awards, most recently the Paul Patterson Education Innovation Award from the CPA in 2018.

John F. Greden M.D. is the Rachel Upjohn Professor of Psychiatry and Clinical Neurosciences in the Department of Psychiatry, Founder and Executive Director of the University of Michigan Depression Center, Founding Chair, National Network of Depression Centers (NNDC), and Research Professor in the Molecular and Behavioral Neuroscience Institute. He has authored or co-authored more than 400 articles, refereed abstracts, books, book chapters, and presented approximately 335 invited lectures. He has almost three decades of NIH funding as investigator, co-investigator and consultant. Major research themes have focused upon studying biomarkers and developing treatment strategies to prevent recurrences of depression and bipolar disorders. He has served as mentor for more than a dozen NIH or Veterans Administration "K" awardees and young investigators, and presented 10 keynote addresses for the American Psychiatric Association's "Psychiatry Young Investigators' Colloquium." Dr. Greden is past-President of the Society of Biological Psychiatry; the Psychiatric Research Society; the American Association of Chairs of Departments of Psychiatry (AACDP); the Academic Psychiatry Consortium; and the Board of Directors of the American Foundation for Suicide Prevention . He edited the Journal of Psychiatric Research for seven years, chaired the Council on Research for the American Psychiatric Association for five years, served as Council Member of the American College of Neuropsychopharmacology (ACNP), Co-Chair of the National Psychiatry Training Council established by NIMH, and was selected as the 2005 recipient of the Distinguished Alumnus Award of the University of Minnesota Medical School. In 2013 the University of Michigan's Council for Disability Concerns awarded Dr. Greden the James T. Neubacher Award. Dr. Greden also recently received a Special Tribute from the Governor of Michigan for his contributions to the field of mental health.