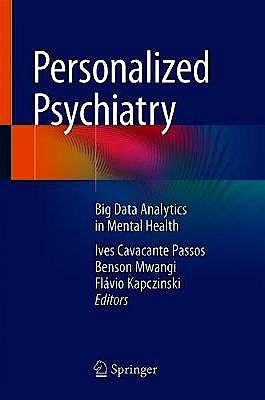 This book integrates the concepts of big data analytics into mental health practice and research.

Mental disorders represent a public health challenge of staggering proportions. According to the most recent Global Burden of Disease study, psychiatric disorders constitute the leading cause of years lost to disability. The high morbidity and mortality related to these conditions are proportional to the potential for overall health gains if mental disorders can be more effectively diagnosed and treated. In order to fill these gaps, analysis in science, industry, and government seeks to use big data for a variety of problems, including clinical outcomes and diagnosis in psychiatry. Multiple mental healthcare providers and research laboratories are increasingly using large data sets to fulfill their mission. Briefly, big data is characterized by high volume, high velocity, variety and veracity of information, and to be useful it must be analyzed, interpreted, and acted upon. As such, focus has to shift to new analytical tools from the field of machine learning that will be critical for anyone practicing medicine, psychiatry and behavioral sciences in the 21st century. Big data analytics is gaining traction in psychiatric research, being used to provide predictive models for both clinical practice and public health systems. As compared with traditional statistical methods that provide primarily average group-level results, big data analytics allows predictions and stratification of clinical outcomes at an individual subject level.

Ives Cavalcante Passos, MD, PhD is a professor of psychiatry at the Universidade Federal do Rio Grande do Sul (UFRGS), Brazil. Dr. Passos completed his PhD and medical residency in psychiatry at UFRGS. He completed his postdoctoral research on machine learning and psychiatry neuroimaging at the University of Texas Health Science Center at Houston (UTHealth) - Houston, Texas USA. Dr. Passos has a total of 45 peer-reviewed articles available in Pubmed and 17 book chapters. In 2016, he was selected as Young Physician Leader by the Interacademy Medical Panel and M8 Alliance of Academic Health Centers. His current research interests include 1) integrating multiple biological features to define, to treat, and to predict prognosis of psychiatric disorder outcomes; 2) understanding the biological underpinnings of mood disorders; 3) developing strategies to prevent suicide attempts.

Benson Mwangi, PhD is an assistant professor at the University of Texas Health Science Center at Houston (UTHealth) - Houston, Texas USA. He graduated with a Bachelor's degree in Computer Science from Uganda - East Africa and then completed a 2-year European MSc in computer vision and robotics at Heriot-Watt University - United Kingdom, the University of Girona - Spain and University of Burgundy - France. In August 2012 he was awarded a PhD by the University of Dundee - United Kingdom with a specific focus on machine learning in psychiatric neuroimaging. He has co-authored a total of 63 journal publications, a significant number of which used advanced machine learning algorithms to examine the pathophysiology of major psychiatric disorders. In addition, many of his publications have focused on clinical outcomes such as predicting suicidality using routine clinical data, individualized disease classification and decoding clinical scores from magnetic resonance images and development of individualized human brain maturation trajectories.

Flavio Kapczinski, MD, PhD is a leader in the field of research on bipolar disorder and a full professor of psychiatry at McMaster University. His laboratories in Brazil and, following a recent move, at McMaster University - Hamilton, ON, Canada - have produced a wealth of research supporting the existence of a low-grade immune activation during mood episodes, and has pioneered the field of oxidative stress research in mood disorders, laying the foundation for new interventions such as the use of N-Acetylcisteine. His work has also provided the basis for the concept of neuroprogression and the development of a clinical staging system that advances our understanding of the pathophysiology of bipolar disorder and will lead to the development of new, stage-specific treatment approaches. Dr. Kapczinski has also been a very prolific mentor, with several former trainees currently occupying important academic positions worldwide. Currently he is among the three most productive researchers in the field of bipolar disorder, and among the five most influential researchers in psychiatry in Canada. In 2013, Dr. Kapczinski received the Mogens Schou Prize for Education from the International Society of bipolar disorders. Clarivate Inc (formerly Thomson Reuters) lists Dr. Kapczinski among the most influential minds in Academia. He has a total of 450 peer-reviewed articles available in Pubmed.