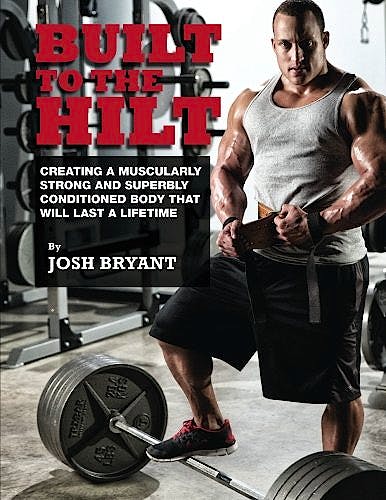 Built to the Hilt. Creating a Muscularly Strong and Superbly Conditioned Body That Will Last a Lifetime

In your hands, is the book people are saying will be the most talked about and most widely used bodybuilding and strength book ever written!
Inside its pages, here is what is waiting for you…

The lifetime training secrets revealed by one of the world’s top trainers.

The never before seen exercises and photos that will inspire you to train TODAY.

The most advanced scientific tips (backed by hundreds of scientific research studies and citations), ideas, and concepts ever for muscle building and fat loss.

The proven methods and routines used by champions and people just like you, for results you thought were simply impossible to achieve.

The book that will become the best investment you’ll ever make…IF you want to get bigger and stronger.

Josh Bryant is a speed, strength, and conditioning coach. Josh trains some of the strongest and most muscular athletes in the world in person at Metroflex Gym in Arlington, Texas, and via the Internet. Along with his receiving certifications from the International Sports Sciences Association in fitness training, nutrition, and conditioning, Josh was recently awarded the prestigious title of Master of Fitness (MFS) by the ISSA. He also has a Masters Degree in Exercise Science. Josh has won many national and world titles in powerlifting and strongman and was the youngest person in powerlifting history, at 22, to bench press 600 pounds raw. Josh has squatted 909 in the USPF, officially bench pressed 620 pounds raw, and officially deadlifted 800 pounds raw.