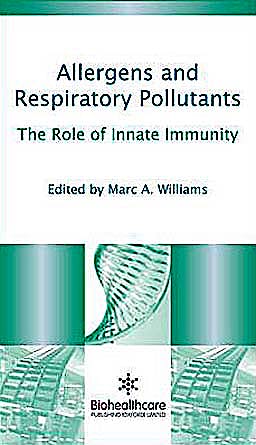 Allergens and Respiratory Pollutants. the Role of Innate Immunity

This book is a collection of 12 authoritative papers that draws upon the collective expertise of world leaders in the fields of innate immunity, immunotoxicology and pulmonary biology. The book critically explores the biological and immunological mechanisms that contribute to immune dysfunction on exposure to allergens and the susceptibility to infectious disease on exposure to ambient pollutants. The clinical relevance of exposure to ambient airborne xenobiotics is critically discussed and collectively, this book provides an educational forum that links the health effects of environmental exposures, immune dysfunction and inflammatory airways disease.

Human airways and the lung are consistently challenged by their environment. Not only are the airways challenged by infectious microorganisms including virulent bacteria and viruses and aeroallergens, the airways are also challenged by 'modern-day' anthropogenic and xenobiotic agents present in the ambient environment and the air we breathe. Collectively, these 'man-made' pollutants expose each and every one of us to respirable pollutants such as ozone, particulate matter pollutants and other noxious respiratory irritants including nitrogen dioxide among others.

A detailed understanding of the response of the pulmonary system to the external environment provides important information on the immune pathogenesis of many airway diseases including asthma. Over the last several decades, the incidence of allergic diseases in industrialized urban environments has progressively increased. Allergic diseases represent a dysfunction of normal host immunity to seemingly harmless environmental triggers, including aeroallergens and airborne pollutants. Allergic diseases include allergic rhino-conjunctivitis, allergic asthma, and atopic eczema and present a significant burden of disease, not least in the industrialized part of the world. By contrast, allergic inflammation is an integral component of the normal host immune response that is observed during parasitic infection where the inflammatory response in itself causes severe clinical sequelae among susceptible individuals. The two compartment model of allergic hypersensitivity bridges genetic and environmental factors as key components in allergic sensitization. In recent years, innate immune mechanisms have been recognized as key players in allergic inflammation with particular emphasis paid to the role of basophils, mast cells, eosinophils and dendritic cells in sensing allergens and environmental xenobiotics as 'danger' signals and presenting them to the adaptive arm of host immunity.

Note: this book is not a product of the United States Environmental Protection Agency. The views expressed do not necessarily represent the views of the USEPA or the U.S. Government

• Discusses recent advances in our understanding of cell-mediated innate immune mechanisms that occur during allergic inflammation and provides important timely coverage of diseases of concern and how such diseases are influenced by a dysfunctional immune system
• Provides useful information on linking environmental 'danger signals' that provoke immune dysfunction and exacerbation of existing disease
• Not only draws upon the collective expertise of an international college of leaders in the field, but also provides chapters that provide essential reference material Is highly relevant to the basic researcher as well as those practicing health care in the fields of pulmonary medicine, human clinical immunology and translational medicine

Students of immunotoxicology, basic immunology and public health programs; research scientists in the fields of toxicology, immunology and pulmonary medicine; research scientists with focused research programs on the health effects of allergens, airborne ambient pollutants as well as the impact of respirable xenobiotics in human health; Industry and Government regulatory investigators will find this book a useful reference material; Environmental scientists, epidemiologists, toxicologists and immunologists.

Dr Marc A. Williams is a Biologist with the United States Environmental Protection Agency, Research Triangle Park, USA and a former Assistant Professor of Medicine and Environmental Medicine at The University of Rochester School of Medicine and Dentistry, USA and Instructor of Medicine at The Johns Hopkins University School of Medicine. He has a long-standing interest and program of research in the field of immunotoxicology and innate immunity. Currently, he is studying the cell-mediated and molecular mechanisms involved in the dysfunction of the pulmonary immune system and the role played by respirable ambient pollutants including diesel exhaust particulate matter and ambient airborne particulate matter in that process. Dr Williams has a distinguished career in basic and translational scientific research. He serves on numerous national leadership committees including those of The American Thoracic Society (ATS) and The American Academy of Asthma, Allergy and Immunology (AAAAI) and is a fellow of AAAAI. Dr Williams also serves as Associate Editor of Stem Cells and Development and of The Journal of Innate Immunity and serves on the editorial boards of several others including Biomarker Insights, Journal of Receptor, Ligand and Channel Research and ScientificWorldJournal (Immunol & Inflammation Domain). Dr Williams is listed in Marquis Who's Who in America and Cambridge Who's Who of Professionals. He has also been recognized through membership of The Faculty of 1000 (Immunology - Section on Innate Immunity) and is the author of more than 60 original research papers, invited reviews and editorials.