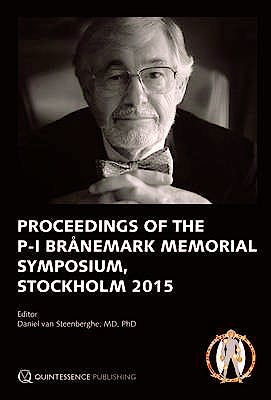 This memorial symposium was planned by friends of Professor P-I Brånemark who for decades played a major role in different medical and scientific disciplines, through his discovery of osseointegration.Trained as an MD at the University of Lund, where he also received his PhD and then became professor of anatomy at the University of Gothenburg. He was awarded innumerable awards, more than 25honorary degrees and doctorates, honorary fellowships and medals throughout the world. He inspired - sometimes even trained - thousands of colleagues and researchers in reconstructive surgery. Hisdiscovery has already benefited millions of patients. Sadly Professor P-I Brånemark passed away on December 20, 2014.

The meeting started with a state dinner at the Grand Hotel, Stockholm, while the symposium was graciously hosted by the Karolinska Institutet. A selection of pioneers and intimate collaborators were invitedto make presentations in their respective fields, which ranged from oral and maxillofacial surgery to hand surgery, and from orthopaedics to ENT, including anaplastology and prosthodontics. IndeedBrånemark's contributions are so universal that they cannot be associated with one particular field of healthcare or science. The contributors illustrated how important the work, teachings and convictions of P-I, as he was mostly called, were and remain on the development of new approaches in oral and extraoral rehabilitation of amputees. His research on the microcirculation of hard and soft tissues also opened up new perspectives.

The aim of this book is to perpetuate his teachings, as formulated by his wife Barbro K. Brånemark during her welcome speech "Let us together continue what P-I started and do our best for our fellow humanbeings like P-I did". Therefore all benefits of the meeting and publication will go to the "P-I Brånemark Institute Bauru" in Brazil.

The Biology and Clinical Outcome of Osseointegration Per-Ingvar Brånemark's Early Research on Osseointegration and its Meaning on the Histological and Ultrastructural Levels
Tomas Albrektsson, MD, PhD, ODhc, RCPSG

The Cooperation between Surgeon and Anaplastologist
Kerstin Bergström, CDT, MDhc

The Time of Loading Implants From the Brånemark Novum to the Generalized Use of Immediate Implant Loading
Kenji W. Higuchi, DDS, MS; John B. Brunski, PhD

P-I and the Industry The Journey from Understanding in 1952 to Patient Care and the Spawning of an Industry Today
Richard Laube, CEO Nobel Biocare