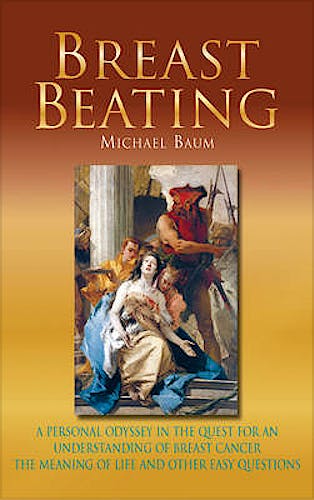 Breast Beating: A Personal Odyssey in the Quest for an Understanding of Breast Cancer, the Meaning of Life and Other Easy Questions

Michael Baum is recognised as a world authority on breast cancer and surgery. In 2007 he was awarded the St.Gallen prize, the most prestigious award worldwide for breast cancer research. This book is the story of his life, his work and his mission.

Part autobiography, part anti-establishment polemic, part scientific empirical dialogue, Breast Beating recounts the story of Michael's extraordinarily gifted family, his attachment and adherence to the Jewish faith, and on a wider scale his profound love for human kind. He propounds his appreciation for the arts, music and the finer things of life.

Michael is a man of science and medicine. Having qualified as a surgeon and reached the top of his profession, his career path also led him into battle against breast cancer wherein with colleagues he developed a number of clinical trials that changed the way breast cancer patients were treated. His research, operations and knowledge have contributed to the improvement in care for cancer sufferers worldwide, and have saved many lives.

Michael's steadfastly scientific way of thinking with his knowledge firmly grounded in fact and not hypothesis has recently led him into confrontation with Prince Charles and other proponents of homeopathy and alternative medicine. In this book he explains just how and why he holds such strong opinions and beliefs both from a professional and personal point of view.