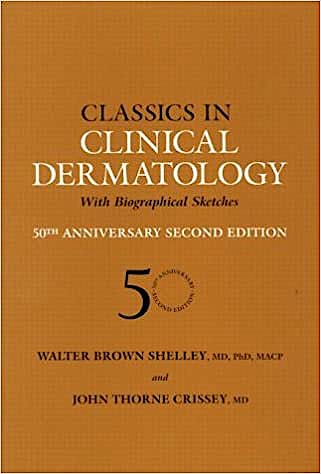 · Information on 95 master dermatologists from around the globe

· Succinct, verbatim, clinical descriptions of cutaneous diseases as published in the last 200 years

First published in 1953, this new edition of the popular Classics in Clinical Dermatology with Biographical Sketches has been updated to include developments during the 50 years since its initial publication. It contains the complete contents of the first edition and presents over 30 additional papers, some of them classics not included in the first edition and other significant publications from the second half of the 20th century. The diseases depicted vary from daily clinical fare to the rarest of the rare. Some chapters provide case reports, while others are the result of countless hours spent meticulously studying patients. Compiled and edited by acknowledged leaders in the field, Classics in Clinical Dermatology with Biographical Sketches 50th Anniversary, Second Edition gives you a taste of the diagnostic problems confronted by master dermatologists and how they solved them.