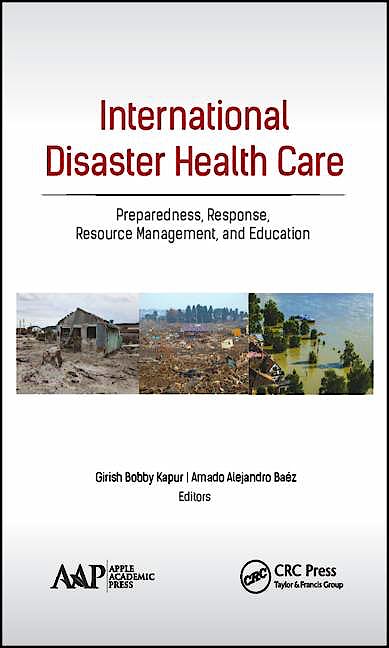 International Disaster Health Care: Preparedness, Response, Resource Management, and Education provides a complete image of the needs, concerns, and insights that relate to disaster preparedness from an international health-care perspective.

The United Nations has recognized the devastating consequences of "unpredictable, unpreventable and impersonal" disasters—at least US $2 trillion in economic damage and more than 1.3 million lives lost from natural disasters in the last two decades alone. In many disasters (both natural and man-made) hundreds—and in major earthquakes, thousands—of lives are lost in the first days following the event because of the lack of medical/surgical facilities to treat those with potentially survivable injuries. Disasters disrupt and destroy not only medical facilities in the disaster zone but also infrastructure (roads, airports, electricity) and potentially local healthcare personnel as well. To minimize morbidity and mortality from disasters, medical treatment must begin immediately, within minutes ideally, but certainly within 24 hours (not the days to weeks currently seen in medical response to disasters).

Edited by emergency health professionals, this valuable compendium is broken into five sections, which describe the following topics:

This volume brings together a wealth of information that will be valuable to disaster management professionals and others responsible for providing emergency services.

The State of Healthcare Disaster Plans in New Zealand and the Sultanate of Oman: An International Comparative Analysis

Orthopedic Surgery in Natural Disaster and Conflict Settings: How Can Quality Care Be Ensured?

The Challenge of Allocating Scarce Medical Resources during a Disaster in a Low Income Country: A Case Study from the 2010 Haitian Earthquake

Can Merging the Roles of Public Health Preparedness and Emergency Management Increase the Efficiency and Effectiveness of Emergency Planning and Response?

Girish Bobby Kapur, MD, MPH, is the Chief of Emergency Medicine at Jackson Memorial Hospital (JMH) in Miami, FL and was recruited in 2015 to bring transformative change in the delivery of high-quality acute patient care at one of the nation’s busiest emergency centers. Dr. Kapur is launching an academic platform with his colleagues at JMH based on clinical excellence, innovative education, translational research, and public health outreach at the Jackson Health System and the University of Miami Miller School of Medicine.

Dr. Kapur is an internationally recognized emergency physician and public health expert who previously served as the Associate Chief for Academic Affairs and the Founding Residency Program Director in the Section of Emergency Medicine at Baylor College of Medicine (BCM) from 2009-2015. Based on his international and academic accomplishments, Dr. Kapur was also appointed by the President of BCM as the Founding Director of the Center for Globalization at BCM. For two years, Dr. Kapur helped guide the College’s global initiatives. In September 2014, Dr. Kapur led a six-person team that trained nearly 1,500 people in Ebola preparedness and response in Nigeria during the middle of the epidemic in the country. Dr. Kapur was also a co-investigator on the USAID grant "Fighting Ebola: A Grand Challenge."

Dr. Kapur received his Bachelor of Arts degree in English Literature and Policy Studies from Rice University and his Medical Doctor degree from Baylor College of Medicine. He then completed his residency in Emergency Medicine from Yale School of Medicine followed by a fellowship in international emergency medicine and global health from Brigham and Women’s Hospital and Harvard School of Medicine. He also completed his Master in Public Health from the Harvard School of Public Health.

Dr. Kapur has published multiple peer-reviewed papers and is the senior editor for the first textbook in the field of Emergency Public Health titled Emergency Public Health: Preparedness and Response. Dr. Kapur has served as the Chair of the International Committee for both the American College of Emergency Physicians and the Society for Academic Emergency Medicine. In June 2012, Dr. Kapur was awarded the Order of the International Federation of Emergency Medicine for his contributions to global health and emergency medicine, an honor given to only two US emergency physicians every two years.

Amado Alejandro Baéz, MD, MSc, MPH, FAAEM, FCCP, FCCM, completed his residency in Emergency Medicine at the Mayo Clinic and a Fellowship in Trauma Critical Care at Harvard University/Brigham and Women's Hospital. He has masters degrees in Public Health and Health Care Management and Policy. Born in raised in the Dominican Republic since 1992, Dr Baez has been actively leading efforts in Prehospital and Disaster Medicine, serving as national Chief of Operation with the Dominican Red Cross, Consultant to the Pan-American Health organization and Security Operator and Advisor to the Dominican Government. Dr. Baéz has lectured in over a dozen countries and authored more than 100 publications and abstracts in the fields of disaster, tactical/operational, trauma, and critical care. From 2006 to 2009, he served as Associate Director for EMS at the Brigham and Women’s Hospital/ Harvard, and from 2009 to 2005, he chaired an Academic Department of Emergency Medicine in the Dominican Republican, where he worked closely with the government, NGOs, and academia in operational medicine and disaster management solutions. Dr. Baéz was instrumental in leading efforts that resulted in a transborder system between Haiti and the Dominican Republic that cared for close to 5,000 victims and relatives of the 2010 earthquake. He currently serves as the Emergency Medicine Program Director at Jackson Memorial Hospital. Previously, he was at the Operational Medicine Institute at Harvard Medical Faculty Physicians (founding director), Hospital General de la Plaza de la Salúd, Universidad Iberoamericana (UNIBE).