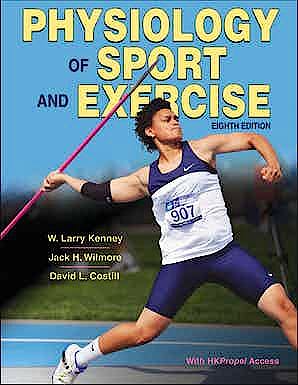 Physiology of Sport and Exercise

Physiology of Sport and Exercise, Eighth Edition With HKPropel Access, continues its legacy as a top physiology textbook and favorite of instructors and students alike. Combining research with extensive visual aids, this resource offers a simple way for students to explore the body’s response to various types and intensities of exercise and sports.

Written by a team of distinguished researchers, all past presidents of the American College of Sports Medicine, this eighth edition has been updated based on the most recent standards and guidelines in the field of exercise physiology. The text builds upon the previous edition’s high standards for illustrations, photos, and medical artwork with a refreshed, more sophisticated look to encourage a deep understanding of complex topics.

Related multimedia components delivered through HKPropel further enrich the learning experience with 26 animations that offer a dynamic way to experience physiological concepts and 66 audio clips that offer explanations of elaborate physiological processes. Leaders in the field help students connect theoretical and practical concepts in 27 video clips. Various types of online learning activities, key term flash card reviews, and key term quizzes offer interactive opportunities to engage with the content—all of which can be assigned, and progress tracked, by instructors directly through HKPropel. In addition, chapter quizzes (assessments) may also be assigned; these are automatically graded to test comprehension of critical concepts. QR codes throughout the text notify students when complementary digital components are available.

Physiology of Sport and Exercise, Eighth Edition, features the following enhancements based on the latest research in the field:

As in previous editions, readability and ease of understanding make Physiology of Sport and Exercise different from other physiology resources. Unique learning aids, including chapter-opening outlines and review boxes throughout each chapter, will help students focus on the major concepts addressed. Study questions and a list of key terms at the end of each chapter provide opportunities for recall and self-assessment. A comprehensive glossary and lists of common abbreviations and conversions provide easy reference for students.

Physiology of Sport and Exercise has been a pivotal textbook in the field of exercise physiology. Through this edition’s dynamic and interactive learning activities, easy-to-follow layouts, and research-oriented content enriched with visual supplements, students and instructors will find this an invaluable resource for their continued education.

Note: A code for accessing HKPropel is included with all new print books.

W. Larry Kenney, PhD, is the Marie Underhill Noll Chair in Human Performance and a professor of physiology and kinesiology at Pennsylvania State University at University Park. He received his PhD in physiology from Penn State in 1983. Working at Noll Laboratory, Kenney is researching the effects of aging and disease states such as hypertension on the control of blood flow to human skin and has been continuously funded by NIH since 1983. He also studies the effects of heat, cold, and dehydration on various aspects of health, exercise, and athletic performance as well as the biophysics of heat exchange between humans and the environment. He is the author of more than 200 papers, books, book chapters, and other publications.

Kenney was president of the American College of Sports Medicine (ACSM) from 2003 to 2004. He is a fellow of the ACSM and is active in the American Physiological Society.

For his service to the university and his field, Kenney was awarded Penn State University’s Faculty Scholar Medal, the Evan G. and Helen G. Pattishall Outstanding Research Achievement Award, and the Pauline Schmitt Russell Distinguished Research Career Award. He was awarded ACSM’s New Investigator Award in 1987 and their Citation Award in 2008.

Kenney has been a member of the editorial and advisory boards for several journals, including Medicine and Science in Sports and Exercise, Current Sports Medicine Reports (inaugural board member), Exercise and Sport Sciences Reviews, Journal of Applied Physiology, Human Performance, Fitness Management, and ACSM’s Health & Fitness Journal (inaugural board member). He is also an active grant reviewer for the National Institutes of Health and many other organizations. He and his wife, Patti, have three children, all of whom were Division I college athletes.

Wilmore published 53 chapters, more than 320 peer-reviewed research papers, and 15 books on exercise physiology. He was one of five principal investigators for the HERITAGE Family Study, a large multicenter clinical trial investigating the possible genetic basis for the variability in the responses of physiological measures and risk factors for cardiovascular disease and type 2 diabetes to endurance exercise training. Wilmore’s research interests included determining the role of exercise in the prevention and control of both obesity and coronary heart disease, determining the mechanisms accounting for alterations in physiological function with training and detraining, and factors limiting the performance of elite athletes.

A former president of the American College of Sports Medicine (ACSM), Wilmore received ACSM’s Honor Award in 2006. In addition to serving as chair for many ACSM organizational committees, Wilmore was on the United States Olympic Committee’s Sports Medicine Council and chaired their Research Committee. He was a member of the American Physiological Society and a fellow and former president of the American Academy of Kinesiology and Physical Education. Wilmore consulted for several professional sport teams, the California Highway Patrol, the President’s Council on Physical Fitness and Sports, NASA, and the U.S. Air Force. He also served on editorial boards of several journals.

Wilmore passed away during the preparation of the sixth edition of this text.

Costill has written and coauthored more than 430 publications over the course of his career, including six books and articles in both peer-reviewed and lay publications. He was the original editor in chief of the International Journal of Sports Medicine for 12 years. Between 1971 and 1998, he averaged 25 U.S. and international lecture trips each year. He was president of the American College of Sports Medicine (ACSM) from 1976 to 1977, a member of its board of trustees for 12 years, and a recipient of ACSM’s Citation Award and Honor Award. He has received numerous other honors, including an honorary doctoral degree from the Stockholm School of Physical Education, the Professional Achievement Award from Ohio State University, the President’s Medal of Distinction at Ball State University, and the Distinguished Alumni Award from Cuyahoga Falls Public Schools. Many of his former students are now leaders in the fields of exercise physiology, medicine, and science.

Costill received his PhD in physical education and physiology from Ohio State University in 1965. He and his wife of 58 years, Judy, have two daughters. Now retired, Dr. Costill is a private pilot, auto and experimental airplane builder, competitive masters swimmer, and former marathon runner.