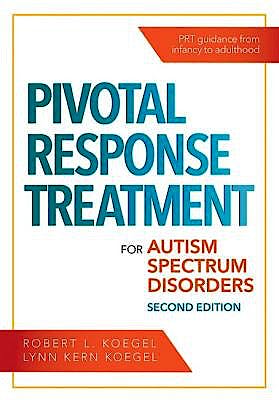 This book guides professionals who work with people with autism spectrum disorders (ASD) to implement Pivotal Response Treatment (PRT). PRT is a well-established, empirically supported approach that targets pivotal areas of behavior–that is, areas in which improvements lead to large collateral changes in other areas of functioning and responding. Targeting these pivotal areas thus results in widespread improvement in communication, behavior, and social skills. This second edition, organized to follow a developmental track from infancy through early adulthood, addresses several new topics, including working with adolescents and young adults. Updated to include the latest research supporting PRT, it has also been revised to ensure key concepts are accessible to expert and nonexpert readers alike.

Robert L. Koegel, Ph.D., is Director of the Autism Research Center, Professor of Educational Psychology and Counseling/Clinical/School Psychology, and Professor of Special Education, Disability, and Risk Studies at the Graduate School of Education at the University of California, Santa Barbara. Dr. Robert L. Koegel is internationally known for his work in the area of autism, specializing in language intervention, family support, and school inclusion. He has published well over 150 articles and papers relating to the treatment of autism. He also has authored five books on the treatment of autism and on positive behavioral support. He has been the recipient of numerous multimillion-dollar research and training grants from the National Institutes of Health, the U.S. Department of Education, and the National Institute of Mental Health. Models of his procedures have been used in public schools and in parent education programs throughout California and the United States, as well as other countries.

Lynn Kern Koegel, Ph.D., CCC-SLP, is Clinic Director at the Autism Research Center of the Graduate School of Education at the University of California, Santa Barbara. She has been active in the development of programs to improve communication in children with autism, including the development of first words, development of grammatical structures, and pragmatics. Dr. Lynn Kern Koegel is co-author and co-editor of major textbooks on autism and positive behavioral support and is co-author of the bestselling book Overcoming Autism: Finding the Answers, Strategies, and Hope That Can Transform a Child's Life (Penguin, 2004). In addition to her published books and articles in the area of communication and language development, she has developed and published prodcedures and field manuals in the area of self-management and functional analysis that are used in school districts throughout the United States and have been translated in most major languages used throughout the world. Dr. Lynn Kern Koegel is actively involved in providing support and intervention services in school districts, both locally in California and throughout the United States. She has also been featured in news reports on television stations throughout the United States and acted as a consultant for the internationally broadcast ABC television series Supernanny.