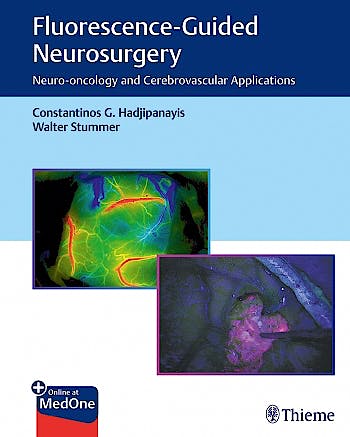 Advances in fluorescence-guided surgery (FGS) have resulted in a paradigm shift in neurosurgical approaches to neuro-oncological and cerebrovascular pathologies. Edited by two of the foremost authorities on the topic, Fluorescence-Guided Neurosurgery: Neuro-oncology and Cerebrovascular Applications encompasses the depth and breadth of this groundbreaking, still nascent technology. The book reflects significant contributions made by world renowned neurosurgeons Constantinos Hadjipanayis, Walter Stummer, and esteemed contributors on the growing uses of 5-aminolevulinic acid (5-ALA) and other FGS agents.

The European Medicine Agency approved 5-ALA in 2007, heralding the birth of FGS globally. In 2017, the U.S. Food and Drug Administration approved 5-ALA (Gleolan) as an imaging agent to facilitate realtime detection and visualization of malignant tissue during glioma surgery. In the two decades since Dr. Stummer's initial description of 5-ALA FGS in a human patient, major strides have been made in its practical applications, leading to improved resection outcomes. As FGS is increasingly incorporated into neurosurgical practice, it holds promise for future innovations. Generously-illustrated and enhanced with online videos, this textbook is the definitive resource on the subject.

This single accessible reference presents the current state-of-the-art on this emerging, exciting surgical technology. As such, it is a must-have for neurosurgical residents, fellows, and practicing neurosurgeons.