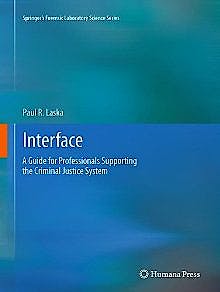 A wide variety of professionals find themselves intimately involved in the criminal justice system; firefighters, emergency medical providers, nurses, physicians, public health personnel, environmental professionals, public works personnel, and many others. No previous work has attempted to address the criminal justice system in terms relevant to these professionals. Interface: A Guide for Professionals Supporting the Criminal Justice System explains the system, provides the reader with guidance to documenting incidents so that the data is both of value to the professional in the future and for use by the other components of the system. Further, this volume presents evidence from the aspect of these professionals, their needs in handling evidence, and basics of collection and preservation for those instances where it falls to them to do so. Professionals, not familiar with safety issues outside of their fields of expertise, have been injured or died as a result of exposure to hazards; it also educates them to considerations for their safety when out of their area of comfort. In addition, this book considers the role of the professional as interviewer, and provides basic guidance to this often valuable skill. Finally, Interface attempts to make the professional knowledgeable and comfortable in the courts, especially on the stand, where the professional may appear as a witness or even as an expert.

Paul R. Laska received a B.S. in criminology from the Florida State University in 1973. In 1974 he began his professional career with the Belle Glade Police Department in Florida as an Identification Officer. In 1977 he joined Florida’s Martin County Sheriff’s Office as a Detective in the Crime Scene Unit. Over the next 25 years he served in that position, as full time Identification Officer (fingerprint specialist), as supervisor of the Forensic Science and Records Units, and as the Environmental Investigator. Additionally, in 1979 he attended the Hazardous Devices School and returned to establish the Bomb Disposal Team for the Sheriff’s Office, service as its commander until his retirement.

Beginning in 1979, he also served as an instructor, being an adjunct instructor with the Indian River Community College (late Indian River State College) in Ft. Pierce, Fl., and the Florida Institute of Technology Underwater Technology Program in Jensen Beach, Fl., As an instructor he also served as an in-service instructor for many law enforcement and fire agencies on the Treasure Coast and Palm Beaches of Florida. He also provided training to a variety of private and public concerns in the area.

Since his retirement from public service, he has continued to provide services as a consultant to the legal profession in fingerprint identification, crime scene investigation, firearms technology and identification, and bomb/explosives technology. Additionally, he regularly publishes in a variety of public safety oriented magazines and journals. He also serves as an instructor with a variety of programs, including the U.S. Department of State Anti-Terrorism Assistance Program, University of South Florida Center for Biological Defense, South Florida UASI, and New Mexico Tech Energetic Materials Research and Testing Center.