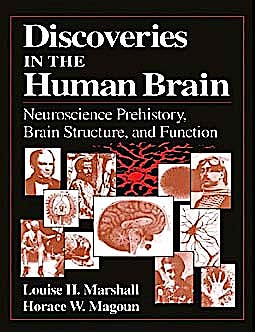 In Discoveries in the Human Brain Louise Marshall and Horace Magoun capture the grand sweep of human brain history leading to the emergence of modern neuroscience as a multidisciplinary field incorporating anatomical, behavioral, cellular, and medical knowledge. The book chronicles-from the time of early humans to the 1980s-the many significant people and events that gradually produced today's understanding of brain anatomy and physiology. Enlightening and engrossing throughout, Dr. Marshall's survey traces this unfolding story from the first findings of gross neuroanatomy in the ancient world to today's functional analysis of the electrophysiology of nerve impulses; from early discoveries of the existence and operations the central nervous system to, finally, the developments in brain chemistry and pharmacology that have now brought us to neural networks and brain modeling. Throughout there are numerous historic and rare plates, a rich tapestry of quotations from primary sources, and concise summaries of the pathbreaking research that shaped and determined modern neuroscience.

Discoveries in the Human Brain illuminates for neuroscientists, neurologists, historians of medicine and science, as well as the educated reader all the major landmarks in the development of neuroscience and its various subdisciplines, ranging from anatomy, chemistry, and physiology, to biomathematics, biophysics, psychobiology, and physiological psychology. It will prove indispensable reading for everyone wanting to understand the evolution of neuroscience and the broad interdisciplinary foundation on which our knowledge of mind-brain relations and human consciousness rests.

". . .a remarkable work of science, art, and history. . .The rich heritage of neuroscience comes alive here, even for the general reader. . . fascinating and valuable reading"-Choice: Current Reviews of Academic Books

"This excellent book. . .should be of interest to neurologists, neurosurgeons, neuroscientists, and others interested in the history of neuroscience."-Journal of the American Medical Association

". . . [a] very fine book. . .the reader will be impressed not only with the text, but also with the style and quality of presentation by Humana Press. The quality of the paper, the layout, and the reproductions of photographs are for the most part outstanding."-Einstein Quarterly

"...The book is filled with interesting pictures of contributing scientists and their laboratories, as well as figures and diagrams, and will be of interest to investigators actively involved in neuroscience research. The book is well written and easy to read. It is enjoyable from the historical standpoint and also valuable for the amount of neuroscientific data available in the text and the references...the book clearly accomplishes its objective to present the discoveries in the human brain and is highly recommended to all interested in this subject."-The Journal of Nervous and Mental Disease