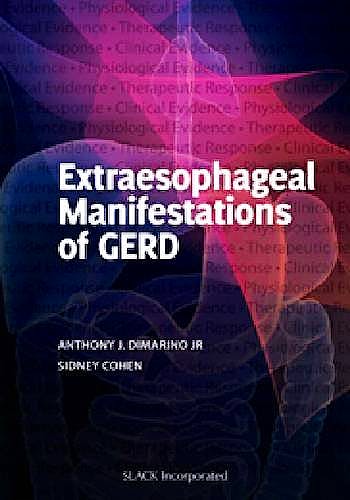 In the past 30 years, gastroesophageal and reflux disease (GERD) has become an important area of clinical medicine. GERD has gradually become associated with other common but unexplained disorders. These conditions have been designated as the extraesophageal manifestations of GERD.

Dr. Anthony J. DiMarino, Jr. and Dr. Sidney Cohen and their contributors have written Extraesophageal Manifestations of GERD with the purpose to identify associations with conditions like hoarseness, laryngeal cancer, sleep disorders, and dental caries, and to explore possible causation and mechanisms of disease or possible noncausal relationships.

The extraesophageal disorders have become widely accepted in clinical practice. The evidence supporting the pathogenesis of these conditions falls into three major categories: guilt by association, observed mechanistic studies, and therapeutic response to treatment.

Inside the pages of Extraesophageal Manifestations of GERD the reader will find recognition and balance in treating patients with common symptom-based disorders. Final resolution of some of the controversies inherent in these associations may require advanced diagnostic tools and advanced pharmacological therapies.

With chapters written by experts in the fields of medicine, pediatrics, otolaryngology, and dentistry, Extraesophageal Manifestations of GERD will be a must have for gastroenterologists, internal medicine residents, surgeons, otolaryngologists, and pediatricians.

Dr. DiMarino is editor-in-chief, along with Stanley Benjamin, MD, Chief of Gastroenterology at Georgetown University, of Gastrointestinal Disease: An Endoscopic Approach, an original 2-volume textbook, which is currently in its second edition, published by SLACK Incorporated.

Dr. DiMarino is considered a preeminent consultative gastroenterologist. In May 2007, Dr. DiMarino received the American Gastroenterological Association 2007 Mentors Research Scholar Award, which is given to individuals “who have made enormous contributions to gastroenterology through mentoring.” Dr. DiMarino’s research interests have primarily been in the areas of esophageal, gastric, and small intestinal motility; celiac disease; and the safety of gastrointestinal endoscopy. At the request of the Food and Drug Administration, he authored the “White Paper,” which is currently still in use as the standard for reprocessing endoscopic gastrointestinal instruments to protect patient safety between patient procedures.

Dr. Cohen has authored and coauthored more than 400 original papers, abstracts, editorials, reviews, and book chapters on a wide range of digestive disease issues. His most recent publications include “Eosinophilic Esophagitis Presenting as Spontaneous Esophageal Rupture (Boerhaave’s Syndrome)” in Clinical Gastroenterology and Hepatology and “Closure of a Nonhealing Gastrocutaneous Fistula Using an Endoscopic Clip” in Southern Medical Journal. His research focus is in the area of smooth muscle physiology and gastrointestinal motor function.