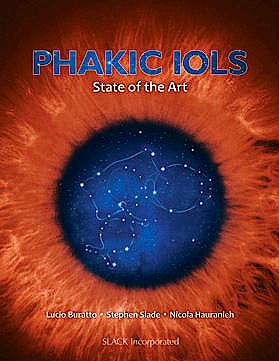 Phakic Iols. State of the Art

The surgical correction of refractive vision errors has dramatically and continually changed over time. The evolution of laser vision correction has been aided by advancements in the technology, growing experience, and improved understanding of the eye and its response to surgery. However, not all refractive errors can be treated with the laser.

Phakic IOLs: State of the Art is designed to provide the advances in phakic IOL technology and techniques, ideal for physicians who treat many of the patients who are not candidates for laser vision correction. The collaboration of Dr. Lucio Buratto, Dr. Stephen Slade, and Dr. Nicola Hauranieh, along with a team of international surgeons, has produced a complete book specifically aimed at improving the treatment and therefore the quality of vision of patients.
Phakic IOLs: State of the Art is designed for ophthalmologists interested in learning the concepts, developing the skills, and preparing for phakic IOL procedures. This book contains a detailed description of the basic technique of the operations, as well as the special techniques devised by the international contributors.
Because the book is richly illustrated with over 200 images that demonstrate the various concepts, readers are able to develop a more thorough understanding of phakic IOL implantation. This definitive resource couples both the authors’ and contributors’ diverse experience and knowledge to produce a complete resource of vision correction with phakic IOLs.

Expert ophthalmologists interested in being on the cutting edge and enhancing their surgical skills, as well as new physicians, will benefit from adding Phakic IOLs: State of the Art to their personal library.

Lucio Buratto, MD is considered a leading international expert in cataract and myopia surgery. He is a pioneer in IOL implantation; in phacoemulsification; and in laser techniques for myopia, astigmatism, and hyperopia. Since 1980, Dr. Buratto has organized and presided over 47 updating congresses on cataract and glaucoma surgery and on laser therapy. He also organized 54 practical courses for teaching eye surgery and served as spokesman and teacher in 386 courses and congresses.
In 1989, Dr. Buratto presented and was the world’s first surgeon to use the excimer laser for intrastromal keratomileusis, and concurrently also started to treat low myopia using PRK techniques. In 1996, he was the world’s first surgeon to use the new technique called “Down-Up LASIK,” which improved the LASIK procedure for the correction of myopia. For teaching purposes, Dr. Buratto has performed surgical operations during live surgery sessions for more than 200 international and Italian congresses, performed surgery during satellite broadcasts to 54 countries in 4 different continents, and designed and produced 136 instruments for ocular surgery.

Dr. Buratto has written over 125 scientific publications and 53 monographs dedicated to ophthalmic surgery and has received several awards, including Maestro of Italian Ophthalmology with Medal of Merit (1998); Barraquer, during the International Congress of the American Academy (2000); Binkhorst Lecture during the XXII Annual Meeting, Paris (2004); and Fyodorov Medal at the HSIOIRS meeting, Athens (2006).

Since 2007, Dr. Buratto has been Honorary President of the Italian Academy of Ophthalmological Sciences (AISO) and past president of the Italian Association of Cataract and Refractive Surgery (AICCER). Presently, he is the director of Centro Ambrosiano Oftalmico (Ophthalmic Microsurgery Center) and practices at his private practice in Milan, Italy.

Stephen Slade, MD, FACS is a native Houstonian and is in private practice in Houston, TX. He graduated Summa Cum Laude and Phi Beta Kappa from the University of Texas at Austin and the University of Texas Medical School with a final elective year spent at Guy’s Hospital, London, UK. He completed a residency at the LSU Eye Center in New Orleans, LA and fellowships in cataract and corneal surgery at Baylor College of Medicine in Houston and in New York, NY on Project ORBIS.
Dr. Slade is a fellow of the American Academy of Ophthalmology and the American College of Surgeons. He is an active teacher of surgical techniques and has taught and certified over 8000 surgeons in LASIK and lamellar refractive surgery. Several hundred have chosen him for their own surgery. Dr. Slade is also an active researcher and has served as medical monitor for several new technologies, including laser cataract surgery, wavefront LASIK, Implantable Collamer Lenses, femtosecond lasers, keratophakia, and accommodating IOLs. He has the nation’s longest experience in LASIK (along with Stephen Brint, MD), femtosecond laser LASIK, accommodating IOLs, and femtosecond laser cataract surgery.
Dr. Slade has received numerous awards including 18 named lectures, Refractive Surgeon of the Year, two China Service Medals, the Lans Award, the Casebeer Award, and the 2007 Barraquer Award. Dr. Slade was selected by his peers for “Best Doctor,” “Texas Super Doctors,” and “Best Doctors in America” and has received the Senior Honor Award of the American Academy of Ophthalmology. He is a regular presenter at medical meetings and has received several “Best Speaker” awards and has twice won First Place at the American Society of Cataract and Refractive Surgery Film Festival. He is on several editorial boards, including the Journal of Refractive Surgery, and serves as Chief Medical Editor of Cataract and Refractive Surgery Today as well as President of the American College of Ophthalmic Surgery.
Dr. Slade has produced many articles and book chapters, holds 5 patents or patents pending in the field, and has authored or coauthored 8 textbooks on ophthalmic surgery. Dr. Slade has appeared on ABC, CBS, CNN, NYT, WSJ and was the featured surgeon on the Emmy award-winning PBS documentary “20/10 by 2010?” narrated by Walter Cronkite.

Nicola Hauranieh, MD is a Syrian native with Italian citizenship and lives in Brescia, Italy where he is in private practice. He graduated at the University of Milan Medical School and completed a residency at the University of Brescia School of Ophthalmology.
Dr. Hauranieh is a fellow of the Italian Academy of Ophthalmological Sciences (AISO), the Italian Society of Ophthalmology (SOI), the European Society of Cataract and Refractive Surgery (ESCRS), the American Society of Cataract and Refractive Surgery (ASCRS), and the American Academy of Ophthalmology (AAO). He has participated in several research protocols, is a regular presenter at medical meetings in Europe and the United States, and has received a “Best Speaker” award.

Dr. Hauranieh has participated in producing articles and book chapters. His interest has always been cataract and refractive surgery and the quality of vision. For 8 years, he has been working on the quality of vision and new technologies; he and Dr. Giardini developed a system to evaluate the performance of near and intermediate quality of vision with many papers presented about this argument.