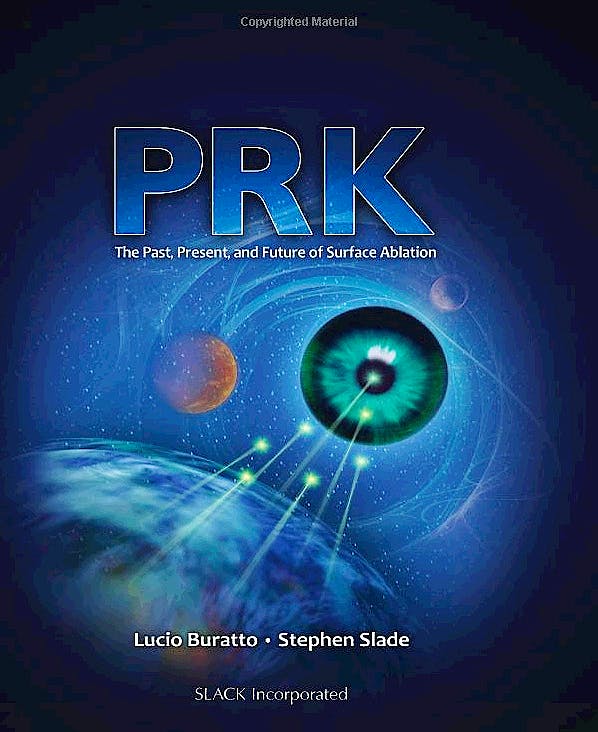 Prk. the Past, Present, and Future of Surface Ablation

Modern laser vision correction has continually changed since its inception. The evolution of this procedure has been aided by broad technological advancements, increased surgical knowledge, and increased understanding of the cornea and its response to lasers.

PRK: The Past, Present, and Future of Surface Ablation will provide a complete vision of the PRK laser correction techniques that have emerged and the technological advancements that have made them possible. The collaboration of Drs. Buratto, Slade, Serrao, and Lombardo, along with a team of international surgeons have produced a complete book specifically designed to assist clinician’s to improve the quality of their patient’s vision.

With over 85 color illustrations demonstrating the various procedures and concepts, the book will help ophthalmologists develop a more thorough understanding of PRK.

PRK: The Past, Present, and Future of Surface Ablation is excellent for surgeons interested in learning the concepts, developing skills, and preparing for the actual laser procedure. This definitive resource couples both the authors' and 9 contributors' diverse experience and knowledge to produce a complete vision of PRK laser vision correction.

PRK: The Past, Present, and Future of Surface Ablation will be the definitive resource necessary for all surgeons aspiring to improve their surgical results using the latest techniques available.

Lucio Buratto, MD is considered a leading international expert in cataract and myopia surgery. He is a pioneer in IOL implantation; in phacoemulsification; and in laser techniques for myopia, astigmatism, and hyperopia. Since 1980, Dr. Buratto has organized and presided over 47 updating congresses on cataract and glaucoma surgery and on laser therapy. He also organized 54 practical courses for the teaching of eye surgery and served as spokesman and teacher in 386 courses and congresses.

In 1989, Dr. Buratto presented and was the world’s first surgeon to use the excimer laser for intrastromal keratomileusis, and concurrently also started to treat low myopia using PRK techniques. In 1996, he was the world’s first surgeon to use the new technique called “Down-Up LASIK,” which improved the LASIK procedure for the correction of myopia. For teaching purposes, Dr. Buratto has performed surgical operations during live surgery sessions for more than 200 international and Italian congresses; performed surgery during satellite broadcasts to 54 countries in 4 different continents; and designed and produced 136 instruments for ocular surgery.

Dr. Buratto has written over 125 scientific publications and 53 monographs dedicated to ophthalmic surgery and has received several awards, including Maestro of Italian Ophthalmology with Medal of Merit (1998); Barraquer, during the International Congress of the American Academy (2000); Binkhorst Lecture during the XXII Annual Meeting, Paris (2004); and Fyodorov Medal at the HSIOIRS meeting, Athens (2006).

Since 2007, Dr. Buratto has been Honorary President of AISO (Italian Academy of Ophthalmological Sciences) and past president of AICCER (Italian Association of Cataract and Refractive Surgery). Presently, he is the director of Centro Ambrosiano Oftalmico (Ophthalmic Microsurgery Center), and practices at his private profession in Milan.

Dr. Slade is a fellow of the American Academy of Ophthalmology and the American College of Surgeons. He is an active teacher of surgical techniques and has taught and certified over 8,000 surgeons in LASIK and lamellar refractive surgery. Several hundred have chosen him for their own surgery. Dr. Slade is also an active researcher and has served as medical monitor for several new technologies, including laser cataract surgery, wavefront LASIK, ICLs, femtosecond lasers, keratophakia and accommodating IOLs. He has the nation’s longest experience in LASIK (along with Stephen Brint, MD), femtosecond laser LASIK, accommodating IOLs, and femtosecond laser cataract surgery.

Dr. Slade has produced many articles and book chapters, holds 5 patents or patents pending in the field, and has authored or co-authored 8 textbooks on ophthalmic surgery. Dr. Slade has appeared on ABC, CBS, CNN, NYT, WSJ and was the featured surgeon on the Emmy award-winning PBS documentary “20/10 by 2010?” narrated by Walter Chronkite.

Sebastiano Serrao, MD, PhD graduated with a degree in medicine and surgery in 1992 then continued on to specialize in ophthalmology in 1996. In 2004, he completed his PhD in ophthalmology and surgical correction of refractive defects at the University of Padua, Italy. Dr. Serrao has trained at Moorfields Eye Hospital, London (1996), Revision Eye Center, Ohio (2000), and the Wilmer Eye Institute at the Johns Hopkins Hospital, Maryland (2002). Dr. Serrao is the founder and director of the refractive and cataract Centre “Serraolaser” in Rome, Italy and the author of more than 25 peer-reviewed papers. He has been working as a researcher at IRCCS Fondazione G.B. Bietti in Rome, Italy since January 2010.