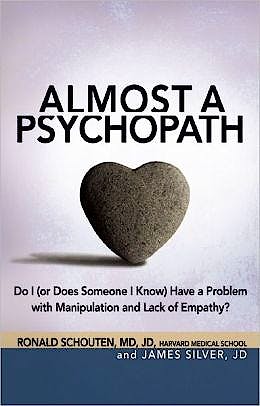 Almost a Psychopath. Do I (Or Does Someone I Know) Have a Problem with Manipulation and Lack of Empathy?

Do you know someone who is too manipulative and full of himself? Does someone you know charm the masses yet lack the ability to deeply connect with those around her?

Grandiosity and exaggerated self-worth. Pathological lying. Manipulation. Lack of remorse. Shallowness. Exploitation for financial gain. These are the qualities of Almost Psychopaths. They are not the deranged criminals or serial killers that might be coined "psychopaths" in the movies or on TV. They are spouses, coworkers, bosses, neighbors, and people in the news who exhibit many of the same behaviors as a full-blown psychopath, but with less intensity and consistency.

In Almost a Psychopath, Ronald Schouten, MD, JD, and James Silver, JD, draw on scientific research and their own experiences to help you identify if you are an Almost Psychopath and, if so, guide you to interventions and resources to change your behavior.

The Almost Effect Series presents books written by Harvard Medical School faculty and other experts that offer guidance on common behavioral and physical problems falling in the spectrum between normal health and a full-blown medical condition. These are the first publications to help general readers recognize and address these problems.

Chapter 1 Setting the Stage
Chapter 2 What Is a Psychopath?
Chapter 3 The Almost Psychopath
Chapter 4 Could It Be Something Else?

Part 2 Dealing With Almost Psychopaths in Our Lives

Ronald Schouten, MD, JD, has assessed individuals ranging from victims of child abuse, professional misconduct, and domestic violence to those accused of crimes that include bank robbery, campus shootings, and multiple murders. He is currently on staff at Harvard Medical School.

James Silver, JD, is a former federal prosecutor and current criminal defense attorney who has tried cases and handled appeals on offenses spanning the gamut of illegal behavior, from shoplifting to murder.