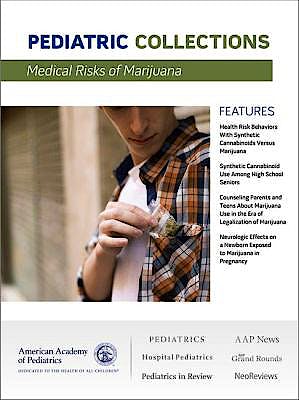 Pediatric Collections offers what you need to know - original, focused research in a snapshot approach.

In recent years, exposure to marijuana and other cannabinoids has become an increasing challenge. Legalization of marijuana for both medical and recreational use has already happened in some states, and more states are considering this. What is the risk of use or secondary exposure, including accidental ingestion, to marijuana or synthetic cannabinoids? What factors are associated with use or secondary exposure? What are the implications for children and teens who use marijuana or synthetic cannabinoids?

As a bonus to ordering this print collection, receive a FREE prevention poster with purchase, "Synthetic Cannabinoids and Marijuana, The Who's Who of Usage."

· If You Are Not Aware of the Health Risks of Synthetic Cannabinoids, Two New Studies Will Remedy That Situation

· Longitudinal Predictors of Synthetic Cannabinoid Use in Adolescents

· Synthetic Cannabinoid Use and High School Seniors: A Worrisome Combination

· From the American Academy of Pediatrics Original Publication March-1-2015

· From the American Academy of Pediatrics Original Publication March-1-2015

· From the American Academy of Pediatrics Original Publication March-1-2017

· Neurologic Effects on a Newborn Exposed to Marijuana in Pregnancy

· Clinical Presentation of Intoxication Due to Synthetic Cannabinoids

· Alcohol and Marijuana Use and Treatment Nonadherence Among Medically Vulnerable Youth

The American Academy of Pediatrics is an organization of 66,000 primary care pediatricians, pediatric medical subspecialists and pediatric surgical specialists dedicated to the health, safety and well-being of infants, children, adolescents and young adults. The AAP is the largest pediatric publisher in the world, with a diverse list of resources that includes essential clinical and practice management titles and award-winning books for parents.