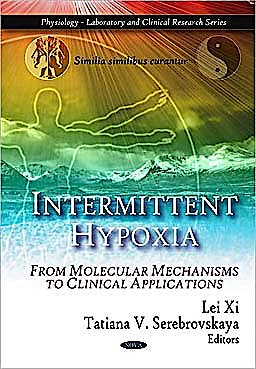 In consolidation of the most updated experimental results and perspectives from diverse research fields on a main theme -- Intermittent Hypoxia, this book encompasses the structural, physiological, pathophysiological, biochemical, genetic, metabolic, and therapeutic aspects of intermittent hypoxia and provides an open forum to promote the bench-to-bed translational implications of both adaptive (beneficial) and maladaptive (detrimental) responses to intermittent hypoxia in animals and humans. Authored by 74 leading scientists from 17 countries in Asia, Europe, North America, and Oceana, the 30 chapters are grouped under 7 different sections covering the profound effects of intermittent hypoxia particularly on cardiovascular, respiratory, nervous, and skeletal muscular systems. Special attentions are paid to the protective or injurious roles played by intermittent hypoxia and their underlying cellular and molecular mechanisms in several major human diseases such as acute myocardial infarction, stroke, sleep apnoea, and Parkinson’s disease. Several chapters have also reviewed the use of intermittent hypoxia training for enhancing exercise performance in elite athletes. Overall, as endorsed by Professor John B. West (Member, Institute of Medicine, National Academy of Sciences of USA; Editor-in-Chief, High Altitude Medicine and Biology) through his Foreword for the book, this is the most comprehensive monograph to date on the topic of intermittent hypoxia, which can cause significant structural and functional impact on the systemic, organic, cellular and molecular processes of human physiology and pathophysiology. Hence, this book could serve as a thorough reference for research scientists, physicians, academic faculty, graduate and medical students, athletic coaches and trainers, who are interested in enhancing their knowledge about the past, present, and future of intermittent hypoxia research and its translational applications for prevention and treatment of major diseases and improving exercise performance.