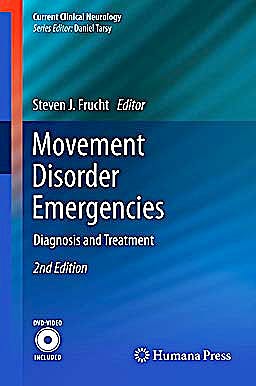 Updated and expanded with nine additional chapters, Movement Disorder Emergencies: Diagnosis and Treatment, Second Edition is an indispensable resource for general neurologists, specialists, fellows, and residents eager to improve their approach toward the patient with a movement disorder emergency. In this comprehensive second edition, prominent neurologists from around the world logically and systematically review the major movement disorder emergencies, instructing the reader on how optimally to recognize and manage these problems. The authors cover a broad range of disorders, including acute dystonic reactions, neuroleptic malignant syndrome, startle syndromes, tic emergencies, and others; and they stress the importance of certain obvious diagnoses such as Wilson's disease, dopa-responsive dystonia, and Whipple's disease, in which delayed diagnosis in less emergent situations can lead to slowly evolving and often irreversible neurologic damage with tragic consequences. In addition, nine topics not covered in the first edition are provided, including genetic counseling and testing crises, suicide risk, psychogenic movement disorders, and others. Patient vignettes at the beginning of each chapter focus the reader's attention and highlight the urgency of the problem. Since astute clinical diagnosis of many movement disorders is still largely dependent on visual pattern recognition in the clinic, an accompanying online collection of physician-patient vignettes illustrates virtually all of the movement disorders described in the text. Importantly, the authors also discuss a range of new treatment paradigms that have emerged since publication of the first edition, especially deep brain stimulation. Authoritative and a leading text in the field, Movement Disorder Emergencies: Diagnosis and Treatment, Second Edition is an established, practical reference that continues to achieve excellence in the field of diagnosis and management of movement disorder emergencies.

"The editors have compiled a unique and excellent review on the challenging topic of movement disorder emergencies...one of the most valuable aspects of this book is the companion CD-ROM...the authors have provided outstanding examples of various rare conditions that are considered movement disorder emergencies...this is a very new and important contribution to the neurologic literature." Weighted Numerical Score: 94 - 4 Stars! - Doody's Health Science Book Review Journal<p>"In this slim volume, the editors give a brief introduction to movement disorders . This is a nice clinical book directed to front-line doctors but with an emphasis I think on those in adult neurology especially those in adult neurology training. Most chapters include clinical vignettes, and at the back of the book is a CD with illustrative videos, an indispensable aid in a subject . I think that the book deserves a place in any hospital that sees emergencies in children." (John B. P. Stephen