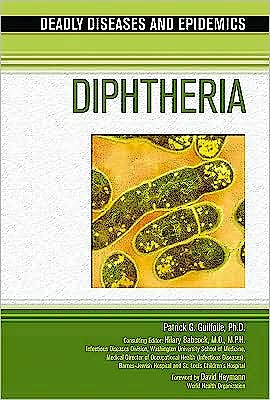 Diphtheria is a bacterial infection caused by Corynebacterium diphtheriae, which attacks the respiratory system. Although the earliest accounts of diphtheria date back at least 2,000 years, this disease was first associated with major epidemics in Europe during the 16th century. By the 18th century, diphtheria became a major cause of childhood illness and death in the New World. With the advent of widespread vaccination in the 1920s, the number of cases and deaths dropped dramatically. However, in areas where vaccination rates drop, diphtheria can rapidly become reestablished, as seen in the late 1990s in several former Soviet republics. Diphtheria describes the disease, the bacteria that causes it, and the development of effective treatments.

Patrick G. Guilfoile, Ph.D., is a professor of biology and an associate dean at Bemidji State University in Minnesota. He earned his doctorate in bacteriology at the University of Wisconsin-Madison, and did postdoctoral research there and at the Whitehead Institute for Biomedical Research at the Massachusetts Institute of Technology. His most recent research has focused on the molecular genetics of ticks and other parasites. He has authored or co-authored more than 20 papers in scientific and biology education journals. He is also the author of Antibiotic-Resistant Bacteria and Tetanus in Chelsea House's Deadly Diseases and Epidemics series.