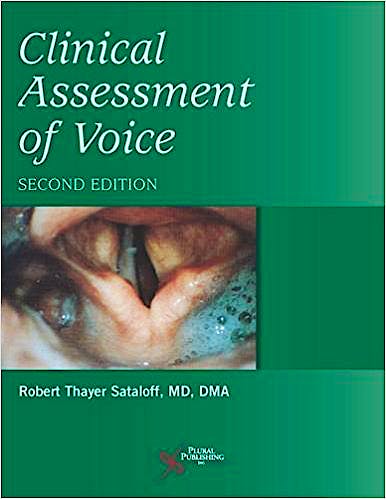 In Clinical Assessment of Voice, Second Edition, Dr. Sataloff brings together a dynamic group of professionals who share his interdisciplinary philosophy of voice care. They provide an introduction to medical diagnostics and special problems with professionalperformers and voice users and offer a rare look at the assessment procedures used by the top voice care teams in the world. Clinical Assessment of Voice, Second Edition, includes chapters written by individuals with specialties in laryngology, teaching of singing and acting, voice science, and speech-language pathology, nursing and acoustics.

Starting with an extensive case history and following with the physical examination, the objective documentation in the voice laboratory, and the latest diagnostic imaging with laryngeal computed tomography and strobovideolaryngoscopy, the chapters delineatethe possible diagnoses and treatment approaches that currently represent the state of the art in assessment of voice disorders. Added is current information on the medical legal evaluation, now ever more important for the professional performer.

Clinical Assessment of Voice, Second Edition is ideal for speech-language pathology students and clinicians and is suitable for classroom use as well as for reference. For practicing otolaryngologists and speech-language pathologists, Clinical Assessment of Voice, Second Edition is an invaluable guide for understanding the techniques for proper diagnosis and for organizing a plan of treatment. For singers and performers, knowledge of the assessment process is presented in a manner that allows them to determine what level of assessment they should pursue for the most current treatment.

Chapter 21. Pollution and Its Effects on the Voice
Robert Thayer Sataloff

Chapter 26. Bodily Injuries and Their Effects on the Voice
Robert Thayer Sataloff