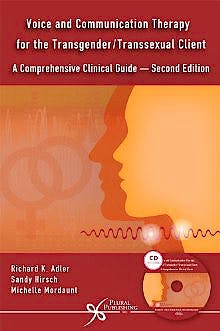 Voice and Communication Therapy for the Transgender/Transsexual Client. A Comprehensive Clinical Guide + CD-ROM

The second edition of Voice and Communication Therapy for the Transgender/Transsexual Client is still the only book of its kind. This comprehensive guide includes evidence-based practice about the voice as well as non-verbal areas. Speech-language Pathologists, ENT physicians, and professors within the areas of singing, theatre, and voice disorders will find this text to be a necessary resource.

Richard Adler, Ph.D.
Richard K. Adler is a professor of speech language hearing sciences at Minnesota State University Moorhead, Moorhead, MN. He teaches courses in Voice Disorders, Neuroanatomy, Motor Speech Disorders, and Phonetics. His research interests include Transgender Voice and Communication Therapy, Professional Practices, and Gender Discrimination within the field of Speech Language Pathology. He is an active member of ASHA and the World Professional Association for Transgender Health (WPATH). He is the first speech-language pathologist appointed to the writing committee for the 7th Edition of the Standards of Care for WPATH. He will also be the United States representative to the first standing committee on Voice and Communication Issues for WPATH that will be in place later this year.

Sandy Hirsch, M.S.
Ms. Hirsch holds a B.A. in French and classics with a minor in music from the University of Lancaster, England and a M.S. in speech-language pathology from the University of Washington. She has been in private practice in Seattle since 1994 serving both business and clinical sectors. She has made voice and communication therapy with the transgender/transsexual population an important focus of her practice. Ms. Hirsch is also on staff at a Seattle Hospital.

Prior to receiving her Masters' degree, Ms. Hirsch was a professional actress and singer. She continues to be active as an amateur classical and jazz singer. Ms. Hirsch also speaks French, German and serviceable Italian and Spanish. A marriage of performance, language, and clinical backgrounds gives her an unusually rich perspective on voice and communication training, as well as a deep understanding of diverse cultures and personalities. She lives in Seattle with her husband and two sons.

Michelle Mordaunt, M.S.
Michelle Mordaunt, M.S. holds a Master's degree from Purdue University, and has been a speech-language pathologist for fifteen years. She has worked primarily with adults in a variety of clinical and hospital settings. From 1995 until 2005, Ms. Mordaunt was the lecturer/clinical supervisor in the area of Voice and Voice Disorders at the University of Washington, Speech and Hearing Department in Seattle, Washington. While at the University of Washington, in addition to serving general voice and speech disorder clients, she developed a comprehensive voice and communication program for Transgender/Transsexual individuals.

Ms. Mordaunt has made frequent presentations in the area of Transgender/Transsexual communication at American Speech and Hearing Association (ASHA) conventions. She also presented at the Washington State Speech and Hearing Association (WSHA) conference, and has presented at the Northwest Transgender/Transsexual Esprit conference on numerous occasions. Ms. Mordaunt's work at the University of Washington has been featured in the San Francisco Examiner, the Seattle Post-Intelligencer, and Advance Magazine for Speech-Language Pathologists & Audiologists. Her work in this area has also been recognized on National Public Radio (NPR -KUOW), and Northwest Evening Magazine, a television commentary program.