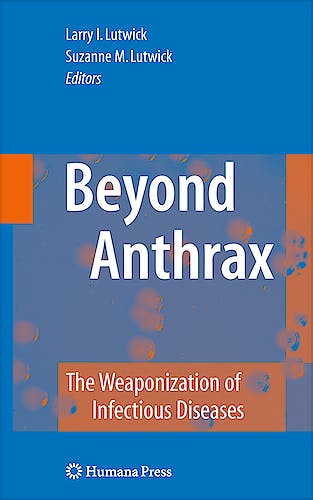 Beyond Anthrax. the Weaponization of Infectious Diseases

Biological warfare has, unfortunately, in the post 9/11 world become a significant topic of discussion in both the medical and lay presses. In the wake of the biological "letter bombs" containing anthrax spores, the possibility of biologic and/or toxic attacks on civilians in any part of the world became no longer a possibility. It is now part of common discussion and consciousness.

This book presents the history of the topics and clinically relevant discussions on those high risk (Category A) diseases beyond anthrax as well as a number of infections and toxins at the Category B level. Importantly, in addition, the text includes sections on Public Health Infrastructure, Public Health Law, Surveillance, Mental Health Management and Media Role all of which relate to epidemics of any sort, not just intentional biological events.

Beyond Anthrax: The Weaponization of Infectious Diseases is a product that should serve as a reference point for clinicians, epidemiologists and public health personnel to understand in practical detail many of the aspects of weapons of biowarfare as well as the appropriate responses to them. It will be an invaluable information source for all those with an interest in biological warfare, including those who require a detailed, organized primer on the diseases thought to be those on the forefront of risk.

Larry I. Lutwick, MD is Director of the Infectious Disease Unit at the Brooklyn Campus of the Veterans Affairs New York Harbor Health Care System in Brooklyn, New York and Professor of Medicine at the State University of New York, Downstate Medical Center.

Written for: Researchers and professionals

Last month a valuable new 17-chapter book on biodefense issues was published titled Beyond Anthrax: The Weaponization of Infectious Diseases. The editors are Dr. Larry Lutwick and Suzanne Lutwick and the publisher is Springer/Humana Press. Updated chapters devoted to many of the CDC Category A and B threat agents are followed by excellent chapters on media, legal, psychosocial, and public health infrastructure perspectives.

For example, a chapter titled The Role of the Media in Bioterrorism by David Brown, a Science writer for the Washington Post, provides a detailed analysis using specific issues and quotations from the 2001 anthrax letter attacks. He begins by discussing two concepts: (1) the principle of parsimony (e.g., Occam's razor) and (2) the bell-shaped curve. The Principle of Parsimony he defines first. One should always choose the simplest explanation of a phenomenon, the one that requires the fewest leaps of logic and the principle that entities should not be multiplied needlessly; the simplest of two competing theories is to be preferred.

Brown observes that Bioterrorism dilutes the importance of parsimony. That's because bioterrorism is an unnatural event even if its components---viruses, toxins, organs, medicines---are each natural and at some level behaving in familiar ways. Bioterrorism creates interactions that do not occur on their own. It produces conditions of unpredictable risk; it makes vulnerable people who aren't normally vulnerable.

He also describes the bell-shaped curve and notes that bioterrorism tends to magnify the importance of the bell curve as an informative idea. The bell-shaped curve depicts that: Most outcomes are similar to one another. They inhabit the fat, or humped-up, part of the curve, and define the average. A small number, however, are quite different from the rest, either much less or much more by whatever metric is in use. Those outcomes inhabit the two thin ends, or tails, of the curve. Such a bell-shaped curve could be applied to help explain how several persons may have been infected by the Bacillus anthracis bacteria sent through the mail system in 2001.