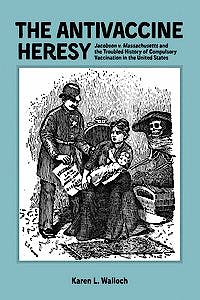 The Antivaccine Heresy: Jacobson v. Massachusetts and the Troubled History of Compulsory Vaccination in the United States

We celebrate vaccination today as a great achievement, yet many nineteenth-century Americans regarded it uneasily, accepting it as a necessary evil forced upon them by their employers or the law. States had to make vaccination compulsory because of great popular distaste for it. Why? How did such a promising innovation come to induce such anxiety? This book explores the history of vaccine development, revealing that, at the end of the nineteenth century, many Americans had good reason to fear vaccination. A century of tinkering had created vaccines that did not live up to claims made for their safety and effectiveness. They induced pain, disability, and grim or even fatal infections. Parents hesitated to vaccinate their children, and health departments had to rely on coercion and sometimes even force to vaccinate a reluctant populace. Antivaccination societies formed to oppose compulsory laws, ultimately arriving at the United States Supreme Court when it upheld these laws in a landmark decision, Jacobson v. Massachusetts (1905). Antivaccinationists did not give up, however, creating a legacy of doubt about vaccination that still resounds on the American political landscape. Karen Walloch is a historian who teaches at the University of Wisconsin-Madison.