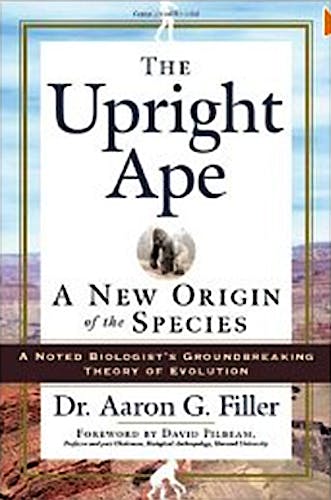 The Upright Ape: A New Origin of the Species

Are you at all fascinated about the theories of evolution and human origins? Have you ever entertained the possibility that Darwin might be only partially correct about some of his most influential—and controversial—theories? Did you know that biology and evolutionary theory are in the midst of their greatest revolution in 200 years?

The story of the evolution of the spine is one of the great untold narratives in the history of science. In The Upright Ape: A New Origin of the Species, internationally known and respected biologist and neurosurgeon Dr. Aaron G. Filler explains how the spine came into being across evolutionary time and how it was molded into human form. He traces the fascination the spinal column has held with biologists, poets, and philosophers alike, and how they have viewed it
across the centuries.

Most importantly, the author explores—and some would say resolves—a 200-year-long controversy surrounding the origin of species. Drawing on such diverse antecedents as history, myth, and religion (including Egyptian myth, Christian iconography, and the Hindu Veda), as well as modern developments in biology and genetics, the author bravely questions and rejects the reigning scientific orthodoxy and shows how humans and apes may have had a common upright ancestor—an “upright ape” —that walked on two legs much as we do now. He makes the bold and compelling argument that, at least from the point of view of posture, apes evolved from humans.

Based on the most rigorous modern science—and its deep and mysterious connection to the worlds of myth, religion, and archetype—Dr. Filler’s theories force a total reassessment of some of the central aspects of our interpretation
of human origins. By pulling together in one text all of these remarkable stories—the spine in myth, the spine in evolutionary theory, and the spine in human origins—Dr. Filler offers the opportunity to look behind the commonplace and explore a stunning series of developments about who we are and how we came to be. This work will forever change how we see evolution, the world we live in, and ultimately, our place in it.

Dr. Aaron G. Filler, M.D., Ph.D. studied evolutionary theory under some of the leading biologists and anthropologists of our time: Ernst Mayr, Stephen J. Gould, David Pilbeam, and Irven DeVore. A neurosurgeon at the Institute for
Spinal Disorders at Cedars Sinai Medical Center and past associate director of the Comprehensive Spine Center at UCLA, Dr. Filler has been a leading innovator in medical imaging and neuroscience. He is the author of Do You Really Need Back Surgery? (Oxford University Press), as well as numerous scientific articles and patents. He resides in Santa Monica, California.