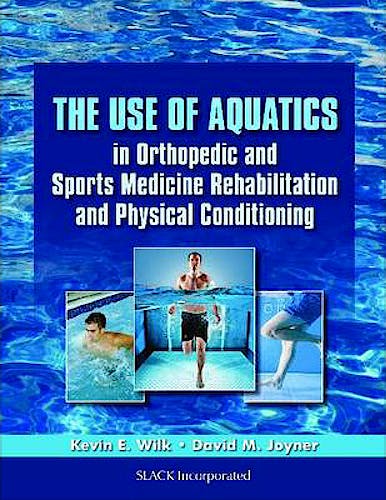 The Use of Aquatics in Orthopedic and Sports Medicine Rehabilitation and Physical Conditioning is a definitive and scientifically based text on the use and application of aquatic methodologies in both rehabilitation and physical conditioning appropriate for the general population to the elite athlete.

The Use of Aquatics in Orthopedic and Sports Medicine Rehabilitation and Physical Conditioning represents a new generation of rehabilitation that is informative enough to be injury and sports specific. Dr. Kevin E. Wilk and Dr. David M. Joyner, along with noted domestic and international leaders in the field, explore the aquatic techniques and principles detailed in the work, while presenting this scientifically based material in an understandable and user-friendly format. Ten chapters take the reader from the history of aquatic rehabilitation and progress to discuss all parameters of aquatic rehabilitation.

Some chapter topics include:
• Theory and applications of aquatic therapy
• Pool selection, facility design, and engineering considerations
• Rehabilitation for the upper and lower extremities and spine
• Sports-specific training
• Research evidence for the benefits of aquatic exercise
• Appendices, including 4 specific protocols for various lesions and disorders

The Use of Aquatics in Orthopedic and Sports Medicine Rehabilitation and Physical Conditioning represents a new era in the use and development of aquatic therapy in sports medicine rehabilitation and is perfect for physical therapists, athletic trainers, strength and conditioning coaches, personal trainers, and sports medicine professionals alike.

Section I Pre-Use and Preparation

“This is a unique addition to the references for aquatic exercise as it is specifically written for aquatics in orthopedic and sports settings...I would recommend it for practitioners who have access to the use of a pool for rehabilitation and conditioning.” - Monique Serpas, DPT, Doody’s Review Service

Kevin E. Wilk, PT, DPT, FAPTA, has lead a distinguished career as a clinical physical therapist for the past 30 years as a leading authority in rehabilitation of sports injuries and orthopedic lesions. He has made significant contributions to laboratory research, biomechanical research, and clinical outcome studies.

Dr. Wilk has been a physical therapist, researcher, and educator for 30 years. Dr. Wilk is currently Associate Clinical Director for Champion Sports Medicine (a Physiotherapy Facility) in Birmingham, AL. In addition, he is the Director of Rehabilitative Research at the American Sports Medicine Institute in Birmingham and is Adjunct Assistant Professor in the Physical Therapy Program at Marquette University in Milwaukee, WI. Dr. Wilk is also the Rehabilitation Consultant for the Tampa Bay Rays’ baseball team, and has worked with the Rays for 16 years. Dr. Wilk has worked with professional baseball for 26 years, and with the Rays since the organization started. Dr. Wilk received his physical therapy degree from Northwestern University Medical School in Chicago, IL, and his DPT from Massachusetts General Hospital Institute of Health Professions in Boston, MA.

Dr. Wilk has published over 155 journal articles, over 98 book chapters, and has lectured at over 700 professional and scientific meetings. Dr. Wilk is on the review boards of 9 journals. Dr. Wilk has received numerous professional awards. In 2012, he was inducted into the Sports Section Blackburn Hall of Fame. Later that same year he was awarded the APTA Catherine Worthingham Fellowship—the highest honor given to an APTA member. Dr. Wilk stated he was humbled and tremendously honored to receive these 2 prestigious recognitions. In 2004, Dr. Wilk received the prestigious Ron Peyton Award for career achievement from the Sports Physical Therapy Section of the APTA. He has received the James Andrews Award for achievement in the area of baseball science. Dr. Wilk was an honored professor at several universities, has given grand rounds at numerous medical facilities, and has lectured internationally. Including this book, he has edited 8 textbooks: The Athletes’ Shoulder (2nd ed), Rehabilitation of the Injured Athlete (3rd ed), Injuries in Baseball, Sports Medicine of Baseball, Orthopaedic Rehabilitation (2nd ed), Handbook of Orthopaedic Rehabilitation (2nd ed), and The Orthopaedic Toolbox (2nd ed).

Dr. Wilk has served as President of the Sports Section of the APTA from June 2007 to June 2010, and has served as Vice President, Education Program Chairman, and Editor of the Home Study Course for the Sports Physical Therapy Section of the APTA for 7 years previously and has served on numerous committees for the APTA. Dr. Wilk was the first nonphysician named to a committee for the American Orthopaedic Society for Sports Medicine (AOSSM). Dr. Wilk is a clinician, researcher, and educator and is generally regarded as one of the leading sports physical therapist experts in the evaluation and treatment of shoulder, knee, and elbow joint injuries. He is active daily with patient care, research, and educational activities. His seminars are extremely well attended and receive excellent reviews based on scientific evidence, clinical experience, innovative approaches, and his interactive and fun approach to seminars. He is continuously updating and changing his seminars to meet the demands of the ever changing health care environment.

A 2-sport All-American and Academic All-American at Penn State, Dr. Joyner earned his bachelor’s degree in science in 1972 and his MD from Penn State’s College of Medicine in 1976. Following residencies in general and orthopedic surgery at The Milton S. Hershey Medical Center and a stint in the World Football League, Dr. Joyner began a medical career with a sports medicine emphasis.

Dr. Joyner is a health care and business consultant and an orthopedic physician. Founder, Chairman, and CEO of Joyner Sports Medicine Institute (JSI) from 1992 to 1998, he developed 19 physical therapy centers in 8 states to deliver state-of-the-art training and rehabilitation services honed by US Olympic and Elite Medical Team experience and leadership.
Closely involved with numerous campus initiatives, Dr. Joyner has served as a member of Penn State Libraries Development Advisory Board, co-chairman of the Paterno Libraries Endowment, chairman of the external advisory board for the Schreyer Institute for Teaching Excellence and the Schreyer Honors College, a member of the Hershey Medical Center Capital Campaign Committee, and was active in the Grand Destiny Campaign for Athletics. He is a member of the board of directors of The Milton S. Hershey Medical Center.

Dr. Joyner served on the Pennsylvania Governor’s Council on Physical Fitness and Sports and is Chairman of USA Football’s Football Wellness Committee and has been an emeritus member of the American Orthopedic Society for Sports Medicine. A Penn State offensive tackle from 1969 to 1971, Dr. Joyner earned first-team All-America honors in his senior season and was a team co-captain. He was instrumental in helping the Nittany Lions earn a cumulative 29-4 record, including an 11-0 mark in 1969, with victories in the 1970 Orange and 1972 Cotton Bowls. Dr. Joyner also was a standout wrestler from 1970 to 1972, earning All-America honors by finishing as the NCAA runner-up at heavyweight in 1971.

Dr. Joyner was named a first-team CoSIDA Academic All-American in 1971 and is one of a select group of individuals who have been inducted into the CoSIDA Academic All-America Hall of Fame, which honors “those with the highest standards in college academics, athletics and in life beyond athletics.” Dr. Joyner also earned an NCAA Postgraduate Scholarship as a Penn State student-athlete and was selected for the prestigious NCAA Silver Anniversary Award in 1997.