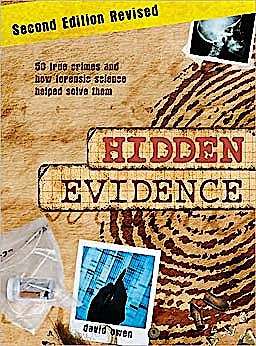 "This is a monumental work."-- Science Books and Films (on the first edition)

"The writing is lively but succinct, complete without being morbid. The illustrations and photos complement the text and go a long way in explaining sophisticated techniques... Highly recommended for public libraries."-- Library Journal (on the first edition)

This revised and updated history of forensics is expanded to include eight recent high-profile cases. David Owen takes readers to the scenes of 50 infamous crimes and provides detailed accounts of the scientific procedures used to catch criminals.

The high-profile cases range from as early as 1775, when Paul Revere used dentures to identify a slain soldier, to as recent as the tragic disappearance of Madeleine McCann. Most cases will be familiar to readers, such as the Lindbergh kidnapping, the Kennedy investigation and Ted Bundy.

Hidden Evidence presents the facts and steers clear of speculation. The book is comprehensive in scope, thoroughly researched and expertly compiled -- a timely update of a fascinating book that will attract a wide range of readers.

Hidden Evidence is a fascinating book. It focuses on the development and evolution of the techniques and technologies used in forensic criminal investigation, from the recognition of the uniqueness of fingerprints some 3,000 years ago in ancient China, to the present-day use of computerized DNA analysis. Each forensic subject is illustrated with synoptic examples using famous or infamous cases that will be familiar, to some degree, to most readers. Some of the cases cited occurred here in Los Angeles, where I have lived and worked since 1952. As I was reading, I reminisced about the days when I was involved in the investigations surrounding the deaths of Marilyn Monroe, Robert F. Kennedy, Sharon Tate, Janis Joplin, William Holden, Natalie Wood, John Belushi, and other lesser-known cases. The history of the development of the technology and advances in criminal investigation is very interesting for me, because in my 50-year forensic career, I have witnessed many of the remarkable technological changes outlined in this book.

Chapter 1 begins with a reference to a T'ang Dynasty Magistrate, Ti Jen-Chieh, who is reputed to have used forensic evidence and logic to solve crimes. Using the facts of various cases as illustrations, the chapter goes on to describe the early history of forensic investigations and I found the discussions of some of these now-discarded theories fascinating, such as the identification of criminal types by facial structure. Subsequent chapters are well-organized into selected topics covering investigation, individual identification, weapons, knives, and blunt instruments, strangulation and suffocation, and more. Each chapter starts with an informative discussion of the various elements of specific investigative techniques, followed by factual presentation of illustrative cases, with a minimum of speculative analysis and conclusions.

Author David Owen has written for investigative-type publications since graduating from the University of Manchester, England, in 1961 with a B.Sc. in Engineering. His writing experience includes TV scripts based on fact, articles for engineering magazines, and an encyclopedia of technology and air-accident investigation.

The book is strictly factual, and easy reading for those who would like to have an introduction to the various fields of the forensic sciences, and for readers interested in the true facts of old and more current, well-known cases, some of which have been fictionalized in earlier publications. I found, among the cases cited, some where I was either a part of the investigation or have heard and seen the scientific presentations at professional meetings, such as the annual meetings of the American Academy of Forensic Sciences (AAFS) and/or the National Association of Medical Examiners (NAME). I recall that at an AAFS meeting one year, I was a part of the speaker panel of the unique, annual scientific session called "The Last Word Society," where well-recognized forensic scientists are asked to review and give definitive thoughts or conclusions on well-known, unsolved cases. I was assigned the case of "Jack the Ripper" to analyze. The author's introduction is entitled "The Trail of the Ripper" and covers this famous, and still unsolved, case.

I like Hidden Evidence very much for its factual, non-controversial presentation of the events with only the key issues cited. The book will be of interest to first-time readers of forensic topics, as well as long-time forensic investigators who want a synoptic, historical overview of their profession. For those interested in a quick reference to past cases with key scientific issues addressed, this is the book: an excellent mini-encyclopedia of widely discussed, high-profile cases.

I would recommend this book to every library as a quick reference to the forensic science professions. It may be of interest to science-oriented students, history majors, journalists (particularly those covering crime), and criminal investigators. Hidden Evidence offers testimony to the centuries of progress in forensic medicine and sciences, and criminal investigation.