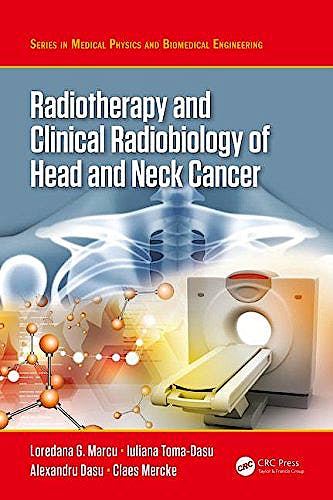 Radiotherapy and Clinical Radiobiology of Head and Neck Cancer

Chapter 5. The mechanisms behind tumour repopulation

Chapter 6. The radiobiology of HPV-associated head and neck cancer

Chapter 8. The treatment of head and neck cancer

Common factors that lead to treatment failure in head and neck cancer are the lack of tumour oxygenation, the accelerated division of cancer cells during treatment, and radioresistance. These tumour-related challenges and possible ways to overcome them are covered in this book, authored by three medical physicists and a clinical oncologist who explain how different radiobiological findings have led to the development of various treatment techniques for head and neck cancer. Novel treatment techniques as supported by current scientific evidence are comprehensively explored, as well as the major challenges that arise in the retreatment of patients who have already undergone a form of radiotherapy for primary head and neck cancer.

Loredana Marcu is Professor of Medical Physics at the University of Oradea, Romania and Adjunct Professor at School of Health Sciences, University of South Australia. She received her PhD in Medical Physics from the University of Adelaide, and her Masters degree in Applied Physics from the West University of Timisoara, Romania. During her Australian experience, she has coordinated the LDR brachytherapy programme at the Royal Adelaide Hospital. She was also a TEAP (Training Education and Accreditation Program) preceptor supervising and coordinating the medical physics training and education of the junior physicists in South Australia.

Her 20 years teaching experience at both Australian and Romanian universities has materialised in 14 books/book chapters published on physics, radiobiology and teaching methodologies. Her current research interests cover in silico modelling of tumour growth and response to treatment, targeted therapies, the radiobiology of head and neck cancer, and the risk of second cancer after radiotherapy. Dr. Marcu is the recipient of the "Boyce Worthley award 2006" given by the Australasian College of Physical Scientists and Engineers in Medicine for her achievements in the areas of radiobiology and medical physics.

Iuliana Toma-Dasu studied Medical Physics at Umeå University, Sweden and received a Ph.D. degree in 2004. Her PhD studies where led by two prominent names in the field of radiobiology, Prof Juliana Denekamp and Prof Jack Fowler. She became a certified medical physicist in 2005 and joined the Medical Radiation Physics group at Karolinska Institutet in Stockholm. Since 2010 she is Associate Professor in Medical Radiation Physics at Stockholm University and the leader of the Medical Radiation Physics Division at Stockholm University and Karolinska Institutet since 2013. In parallel with her deep involvement in the educational program for medical physicists run at Stockholm University, her main research interests focus on exploring the influence of the tumour microenvironment on the treatment outcome and the biological optimisation and adaptation of radiation therapy based on functional imaging.

Alexandru Dasu is the Chief Medical Physicist at the Skandion Clinic, the national Swedish proton centre in Uppsala and Associate Professor in Medical Radiation Physics.

Alexandru Dasu studied Medical Physics at Umeå University, Sweden and received a Ph.D. degree in 2001. He became a certified medical physicist in 2003 and Associate Professor in Medical Radiation Physics in 2008. He has synergistically combined the clinical practice in medical radiation physics with top research work in the field of radiotherapy. In addition to his strong clinical and research interest in proton therapy, one could mention among his main areas of interest the modelling of the influence of tumour microenvironment on the tumour response to radiation with special emphasis on the tumour oxygenation, the study of the response of the tumours to various fractionated regimes in relation to their radiobiological parameters and the risk for stochastic effects following radiotherapy including the risk of secondary cancers.

Claes Mercke is Professor of Radiation Oncology and one of the senior physicians at the Karolinska University Hospital, Department of Oncology, Stockholm, Sweden. He belongs to the team of physicians responsible for the non-surgical treatment programs of patients with malignant diseases in the head and neck, thorax and skin and is also responsible for the radiotherapy of pediatric tumours.

Claes Mercke studied medicine in Lund and Stockholm and was a certified specialist first in medicine and soon thereafter in general oncology. He received his PhD in Oncology and Medicine from the University of Lund and was soon appointed associate professor, affiliated to the same university. He was head of the division of radiotherapy at the Department of Oncology at Sahlgren’s University Hospital in Gothenburg for about 20 years but moved to Stockholm and the Karolinska University Hospital in 2006 after being appointed Professor of Radiation Oncology at Karolinska Institutet. His main research work has been on radiobiology, especially with a focus on genetically determined radiosensitivity, as applied to clinical radiotherapy. Dr Mercke has implemented different techniques, such as modern high dose rate and pulsed dose rate brachytherapy and IMRT for head and neck cancer, prostate cancer and pediatric tumours.