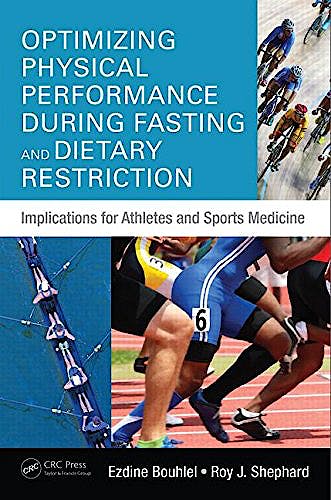 This book examines the effects of sustained fasting and food restrictions, including Ramadan observance, upon the metabolism and physical performance in healthy well-trained subjects. The aim throughout is to present these findings simply and clearly, beginning from fundamental principles, so that the material can be understood not only by sports physicians and graduate students in exercise science, but also by coaches, trainers, nutritionists and the athletes themselves.

Dr. Ezdine Bouhlel completed a Ph.D. in exercise physiology at the Hôpital Pitié Salpetrière in Paris, under the direction of Drs. Hugues Monod and Roy Shephard. He holds two scientific degrees from University of Paris Sud 11 Orsay (M.Sc., and Ph.D). He is currently employed as a Professor of Exercise Physiology at the Higher School of Sport and Physical Education of Tunis, and is a member of the Research Unit of the Faculty of Medicine of Sousse, where he has developed and delivers courses in exercise physiology for graduate students in Sport Medicine and Cardiology of Sport. He also serves as Director of the School of Sport and Physical Education.

His research now focuses on applied sport physiology with particular focus on aerobic and anaerobic metabolism in team and individual sports. He is recognized internationally for his research into the effects of exercise and Ramadan observance upon metabolism and physical performance. His areas of research expertise include in particular assessments of metabolic indices such as maximal fat oxidation and the cross-over point in athletes, body composition, hormone secretion and lipid metabolism.

He currently serves as a reviewer for several journals of applied physiology and sport science. To date, he has published over 30 peer-reviewed articles in sports and exercise science, and has also made more than 40 presentations at national and international conferences.

Dr. R.J. Shephard is currently Professor Emeritus of Applied Physiology in the Faculty of Kinesiology and Physical Education at the University of Toronto. He was born in London, England, and was educated at Guy's Hospital Medical School, University of London. He holds four scientific and medical degrees from University of London (B.Sc., M.B.B.S., Ph.D. and M.D.) and honorary doctorates from the University of Toronto, Gent University (Belgium), the Université de Montréal, and the Université de Québec à Trois Rivières. He has also received Honour Awards from the Canadian Society of Exercise Physiology, the American College of Sports Medicine, and the North American Society for Pediatric Exercise Medicine, and he is a former president of the Canadian Association of Sports Sciences and the American College of Sports Medicine.

Before emigrating to Canada, Dr. Shephard held appointments in the Cardiac Department of Guy's Hospital, the RAF Institute of Aviation Medicine, the Kettering Laboratory at the University of Cincinnati, and the UK Chemical Defense Research Establishment. In Toronto, he has held academic appointments in the School of Hygiene, the Department of Physiology, the Department of Preventive Medicine & Biostatistics, and the Institute of Medical Sciences, also serving as Director of the School of Physical Education & Health for 12 years, and as Director of the Graduate Programme in Exercise Sciences for more than 20 years.

He has recently written extensively upon the medical and physiological effects of Ramadan, collaborating with Dr. Ezdine Bouhlel and the Faculty of Medicine of Sousse in many investigations of this topic.