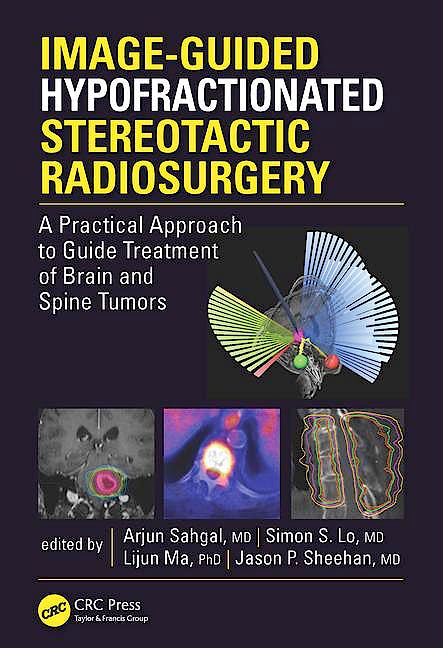 The recent development of hypofractionated stereotactic radiation therapy (SRT), which calls for one to five fractions of high-dose radiation to be administered using special equipment, has resulted in the need for education on practice guidelines.

Image-Guided Hypofractionated Stereotactic Radiosurgery: A Practical Approach to Guide Treatment of Brain and Spine Tumors offers comprehensive, how-to guidance on hypofractionated SRT for brain and spine metastases, glioma, benign tumors, and other tumor types. Presenting the state of the art of the technology and practice, this book:

Comprised of chapters authored by well-recognized experts in the radiation, oncology, and neurosurgery communities, Image-Guided HypofractionatedStereotactic Radiosurgery: A Practical Approach to Guide Treatment of Brain and Spine Tumors delivers a level of technological and clinical detail not available in journal papers.

Arjun Sahgal, MD (chief editor), is a leader in the field of high-precision stereotactic radiation to the brain and spine. After training at the University of Toronto, Ontario, Canada, in radiation oncology, he completed a fellowship at the University of California, San Francisco, in brain and spine radiosurgery with Dr. David Larson. Since then he has been recognized as a national and international clinical expert and research leader in radiosurgery. His main focus is on developing spine stereotactic body radiotherapy as an effective therapy for patients with spinal tumors. He has published numerous book chapters on the subject and more than 200 peer-reviewed papers in high-impact journals, including Journal of Clinical Oncology and The Lancet Oncology. He has edited or written several books specific to research on brain and bone metastases and is an editorial board member for several journals. He was chairman of the International Stereotactic Radiosurgery Society meeting (June 2013) and was a board member for the Brain Tumour Foundation of Canada and the International Stereotactic Radiosurgery Society. He has been invited to speak at several international meetings, has been a visiting professor at various universities, and leads several research groups. His further research activities involve integrating MRI into radiotherapy delivery, combining novel pharmacologic therapies with radiosurgery, and MRI-guided focused ultrasound.

Simon S. Lo, MD, is professor of radiation oncology at Case Western Reserve University, Cleveland, Ohio, and director of radiosurgery services and neurologic radiation oncology at University Hospitals Seidman Cancer Center, Case Comprehensive Cancer Center, Cleveland, Ohio. Dr. Lo graduated from the Faculty of Medicine of The Chinese University of Hong Kong and did his residency in clinical oncology (Royal College of Radiologists, UK curriculum) at Queen Elizabeth Hospital, Hong Kong. He subsequently completed a residency in radiation oncology at the University of Minnesota, Minneapolis, and also received a grant from the American College of Radiation Oncology for a gastrointestinal radiation oncology fellowship at the Mayo Clinic (Minnesota). He was a visiting resident at Princess Margaret Hospital, University of Toronto, Ontario, Canada. He is currently chair of the American College of Radiology Appropriateness Criteria Expert Panel in Bone Metastasis and is the radiation oncology track co-chair for a Radiological Society of North America (RSNA) refresher course. He is an expert in brain and spinal tumors, stereotactic radiosurgery, and stereotactic body radiotherapy (SBRT). He has published more than 135 peer-reviewed papers, more than 50 book chapters, and three textbooks, including a comprehensive textbook in SBRT (27,000 downloads in 32 months). He has given lectures on SBRT to the American Society for Radiation Oncology (ASTRO), RSNA, the Radiosurgery Society, the International Stereotactic Radiosurgery Society, and the American Thoracic Society conferences and in multiple U.S. and international academic centers. He was also a member of both the ASTRO bone and brain metastases taskforces and contributed to the ASTRO guidelines for bone and brain metastases. He is on the editorial boards of multiple oncology journals and is a reviewer for The Lancet, The Lancet Oncology, Nature Reviews Clinical Oncology, Journal of Clinical Oncology, Radiotherapy & Oncology, and International Journal of Radiation Oncology: Biology and Physics. His areas of research are in brain tumors, stereotactic radiosurgery, radiobiological modeling for ablative radiotherapy, SBRT for lung, liver, and spinal tumors, and toxicities associated with SBRT.

Lijun Ma, PhD, is professor in residence of radiation oncology physics and director of the Physics Residency Program at the University of California, San Francisco. Dr. Ma has served in American Association of Physicists in Medicine on multiple task groups and working groups. He currently co-chairs the normal tissue complication probability spine subcommittee and serves on the editorial board of Medical Physics. He is board certified by the American Board of Medical Physics and is a member of the American College of Radiology. He has been active professionally in the International Society of Stereotactic Radiosurgery and has served on its executive board. Dr. Ma has published more than 100 papers and more than 20 book chapters, and is a holder of three international patents.

Jason P. Sheehan, MD, graduated with highest distinction in bachelors of chemical engineering at the University of Virginia, Charlottesville, Virginia, where he subsequently earned a master of science in biomedical engineering and a doctorate in biological physics. He earned his medical degree from the University of Virginia and completed his neurosurgical residency at the University of Virginia along with fellowships in stereotactic and functional neurosurgery at the University of Pittsburgh and microsurgery at the Auckland Medical Center in New Zealand. After his neurosurgical training, he joined the faculty of the University of Virginia’s Department of Neurological Surgery. He currently serves as the Harrison Distinguished Professor of Neurological Surgery. He is also the vice chairman of academic affairs, associate director of the residency program, and director of stereotactic radiosurgery. Dr. Sheehan’s research effort focuses on translational and clinical studies for minimally invasive intracranial and spinal surgery. He has published more than 300 papers and has served as the editor for several books. He has received the National Brain Tumor Foundation’s Translational Research Award, the Young Neurosurgeon Award from the World Federation of Neurological Surgeons, the Integra Award, the Synthes Skull Base Award, and the Crutchfield Gage Research Award. He serves on the editorial boards of Neurosurgery, Journal of Neurosurgery, Journal of Neuro-Oncology, and the Journal of Radiosurgery and SBRT. He is a member of the American Association of Neurological Surgeons (AANS), the Congress of Neurological Surgeons (CNS), the Society for Neuro-Oncology, the Society of Pituitary Surgeons, the American Society of Therapeutic Radiology and Oncology, the International Stereotactic Radiosurgery Society, and the Neurosurgical Society of the Virginias. He serves on the executive committee for the AANS/CNS section on tumors and is chair of the radiosurgery committee for the AANS/CNS section on tumors. He is listed in Best Doctors of America.