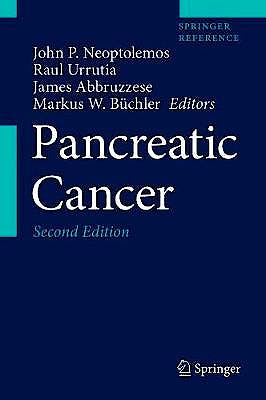 In organizing the second edition of this renowned Handbook, Dr. Neoptolemos and his co-editors have produced and updated a revised edition to the distinguished Major Reference Work devoted to pancreatic cancer. Like its preceding edition, the second edition continues to have a widespread appeal among clinicians, pathologists and basic scientists, who are now struggling to understand this complex and rapidly expanding field. Because of the recent and vast growth in both the clinical and scientific research being done in pancreatic cancer, (there is currently an unprecedented investment by academia and industry in this field), each research's knowledge of other specialty areas outside his or her own is often quite limited. The aim of the new edition is to place the tangible advances, including new developments in surgical approaches with regards to resection techniques, the state of laparoscopic approaches, the growing impact of surgical approaches in the management of recurrent pancreatic cancer, controversies in the management of IMPN as the precursor lesion for PDAC and others - readily at hand. The second edition focuses on advances that will not become dated, and the editors have chosen authors, who are the very best in each area.

John Neoptolemos is Professor of Surgery and Head of the Division of Surgery and Oncology at the University of Liverpool and Honorary Consultant Surgeon at the Royal Liverpool University Hospital. As an undergraduate he studied Natural Sciences at Cambridge (BA 1973, MA 1976) before completing his clinical undergraduate training at Guys Hospital (Cambridge: MB, BChir 1976). He completed his academic and clinical training in Leicester under Prof. Sir Peter Bell, being awarded a Doctorate in Medicine in 1986. Raul A. Urrutia, M.D., Mayo Clinic College of Medicine, Rochester, MN USA. Dr. Urrutia was awarded his M.D., Magna Cum Laude, by the University of Cordoba, Argentina. Dr. James L. Abbruzzese is the Chairman of the Department of Gastrointestinal Medical Oncology at the University of Texas M. D. Anderson Cancer Center, Houston, Texas, where he holds the Annie Laurie Howard Research Distinguished Professorship. Author of over 150 original articles and book chapters, Dr. Abbruzzese has recently been appointed the Editor-in-Chief of the International Journal of Pancreatology. He serves on the editorial board of a number of prestigious journals, including the Journal of Clinical Oncology and Clinical Cancer Research, and also serves on the Scientific Advisory Board of the Lustgarten Foundation for Pancreatic Cancer Research. Markus W. Buchler is Professor of Surgery at the University of Heidelberg, Germany. He studied medicine at the Universities of Heidelberg and Berlin and was trained in surgery at the Department of Surgery, University of Ulm, where he was appointed a Consultant Surgeon in 1987 and Vice Chairman in 1991. Professor Buchler is a specialist in hepato-pancreato-biliary surgery (HPB) and, in particular, pancreatic surgery. He has a substantial curriculum of scientific publications in the field of HPB diseases, especially in translational research of pancreatic cancer. He is Editor or Editorial Board member of many leading journals in general and gastrointestinal surgery, translational and molecular research in pancreatology and other gastrointestinal diseases, including Annals of Surgery, British Journal of Surgery. Digestive Surgery (Editor), Pancreas, Langenbeck's Archive of Surgery (Editor), HPB, and Surgery.