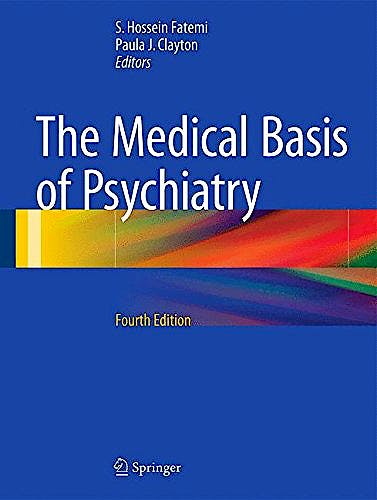 The Medical Basis of Psychiatry

Four years have passed since the last edition (3rd)of this book was published. In the intervening years, several reviews of this book have provided highly encouraging remarks about the value of this book in transmitting information on classification and treatment of psychiatric disorders to the audience. We are proposing to revise all chapters with an eye on accuracy and ease of use, and this is an especially timely endeavor with the upcoming publication of the Diagnostic and Statistical Manual V.All the appropriate new information on biology, etiology, diagnosis and treatment of psychiatric disorders will be added to the current proposed edition. It is our goal to recruit the same authors (if possible) who contributed to the previous edition. While all chapters will be updated (see TOC), those marked by asterisks will be the most likely to undergo more revision. Psychiatry has emerged as a burgeoning scientific field with major advances in etiology and treatment of several disorders. Just as there was excitement in the anatomic advances that took place a hundred years ago when Emil Kraepelin and his collaborators took on the enormous task of classification of psychiatric disorders based on rational scientific thinking, new advances in genetics, biochemistry, neuroanatomy and pharmacotherapy of mental disorders have brought us even closer to a better understanding of complex disorders like schizophrenia, bipolar disorder, depression and even autism. The major goal of the previous edition of this classic book was to update the busy clinician, psychiatric resident and medical student with the most up-to-date information on etiology, diagnosis and treatment of psychiatric disorders. This goal remains the focus of the fourth edition of this book. In this updated and expanded edition, the reader will be provided with the most contemporary information and literature supported by a close survey of the field. This new edition of this classic title, with its focus on biologic and medical aspects of psychiatry, will continue to be of significant help to all interested in the scientific practice of psychiatry.