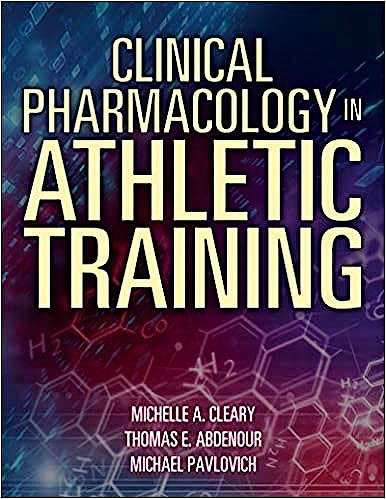 Athletic trainers have a responsibility to provide high-quality pharmaceutical care while meeting both legal and ethical requirements. Clinical Pharmacology in Athletic Training empowers athletic trainers with a functional understanding of pharmacology that enables them to formulate a treatment plan intended to mitigate disease and improve the overall health of their patients. This text incorporates the most up-to-date content from the 2020 Commission on Accreditation of Athletic Training Education (CAATE) standards, and it emphasizes interprofessional practice to enable future and current athletic trainers to collaborate with other health professionals in a manner that optimizes the quality of care.

Clinical Pharmacology in Athletic Training begins by addressing drug legislation and the legal aspects of the athletic trainer’s role in sport medication. The text provides an overview of pharmacokinetics and pharmacodynamics with an emphasis on concepts relevant to clinical practice. Students are introduced to the generic and brand names, general classifications, and appropriate administration of drugs and are guided toward appropriate online reference materials. Part II of this text describes common medications for pain, inflammation, and infections. Part III includes medications for specific conditions, including respiratory, cardiovascular, gastrointestinal, neurological, gynecological, and mental health conditions. The text also includes current information on opioid analgesics, cannabis, and cannabinoid-based medications.

Clinical Pharmacology in Athletic Training teaches students to administer appropriate pharmacological agents for the management of the patient’s condition. The information includes indications, contraindications, dosing, interactions, and adverse reactions. The following features are included to aid in the learning process:

Over the past decade, there has been an increased emphasis on pharmacology in athletic training. Clinical Pharmacology in Athletic Training will equip students with appropriate skills and competencies, prepare them to meet patient needs, and enable them to work in interprofessional teams.4

Michelle Cleary, PhD, ATC, is an associate professor in the physician assistant studies program in the Crean College of Health and Behavioral Science at Chapman University. Prior to joining Chapman in 2012, Cleary taught at Temple University, where she earned her doctorate, and at Florida International University and the University of Hawaii. She is certified as an athletic trainer by the Board of Certification (BOC). She has 20 years of experience teaching in accredited athletic training programs.

Thomas E Abdenour, DHSc, ATC, CES, received his doctorate degree in health science from A.T. Still University in 2011. He is a member of the National Athletic Trainers’ Association (NATA) and is currently on the NATA’s Foundation Board. Abdenour was inducted into the NATA Hall of Fame in 2007 and received the Most Distinguished Athletic Trainer award from NATA in 2014. He contributed to the 2009 NATA consensus statement Managing Prescription and Non-Prescription Medication in the Athletic Training Facility.

Abdenour is best known for his work in the National Basketball Association, where he spent 23 years as the head athletic trainer for the Golden State Warriors. In 1990, he was recognized as the Athletic Trainer of the Year by the National Basketball Athletic Trainers Association. Abdenour served as athletic trainer for the gold-medal-winning USA men's basketball team at the 2000 Summer Olympics in Sydney, Australia. He also founded the Champion Guidance Center for Men in Oakland, California, to support underprivileged men. Following his time with the Golden State Warriors, he served as the head athletic trainer at San Diego State University. While at San Diego State University, he was an approved clinical instructor and an adjunct faculty member in the department of exercise and nutrition science.

Mike Pavlovich, PharmD, earned his doctor of pharmacy degree in 1989 from the University of the Pacific. He is currently the president and owner of Westcliff Compounding Pharmacy. Pavlovich was an American Pharmacists Association (APhA) trustee from 2008 to 2014 and served in the APhA House of Delegates for more than 25 years. He received the Distinguished Achievement Award in Specialized Pharmacy Practice from APhA in 2012 and was recognized for his influence on the practice of pharmaceutical compounding and sports medicine. He is a past president of the California Pharmacists Association and a past board member of Pharmaceutical Care Network.

Prior to his employment at Westcliff Compounding Pharmacy, Pavlovich was the chief pharmacist for SportPharm, which revolutionized athletic trainers’ capacity to manage prescription medications under the guidance of a team physician. He served as team pharmacist on the U.S. Olympic medical team at the 2008 Summer Olympics in Beijing, China. Pavlovich also contributed to the 2009 NATA consensus statement Managing Prescription and Non-Prescription Medication in the Athletic Training Facility. Many of his core recommendations for medication management in the athletic training clinic are still being followed today.