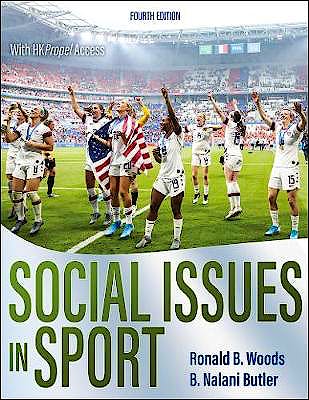 Part I. Studying Sports in Society

Chapter 1. Sport and How We Study It
Sport Through the Ages
Definition of Sport
Study of Sport
Research Methods in Sport
Social Theories
Current Status of Sport Sociology
Chapter Summary
Discussion Questions

Part II. Sport as an Institution

Chapter 13. Religion and Sport
Religion and Sport in History
Christian Influence on Sport
Sport and Religions Other Than Christianity
Use of Religion in Sport by Athletes
Use of Sport by Athletes to Promote Religious Beliefs
Use of Religion by Coaches, Organizations, and Owners
Organizations Using Sport to Promote Religion
Using Sport to Promote Christian Colleges and Secondary Schools
Conflict Between Sport and Religion
Chapter Summary
Discussion Questions

Social Issues in Sport, Fourth Edition With HKPropel Access, introduces students to the study of sport as a social phenomenon. It explores current trends in sport and examines complex connections between sport and politics, economics, religion, race, gender, youth, and more. Author Ronald Woods draws on his experience of more than 40 years as a professor, coach, and sport administrator to explore modern sport from historical and cultural perspectives. New coauthor B. Nalani Butler offers a fresh perspective to the study of sport from an emerging generation of Black female scholars. She draws on her background as an athlete and professor, and leverages her international experience from working with the Center for Sport, Peace and Society and the International Olympic Academy (IOA). The text’s presentation style, full-color design, and ample learning tools are designed to keep students engaged.

Social Issues in Sport, Fourth Edition, is streamlined into three parts, maintaining an accessible and student-friendly format that aligns with a 16-week semester. Part I sets the stage for studying sport from a sociological perspective by defining key terms and presenting crucial social theories. This section examines participation in sport, from spectators to performers, and explores sport economics through sport management, sport marketing, and sport media. Part II discusses sport institutions at all levels, from youth sport to Olympic competition. Part III is devoted to current issues and critically analyzes the effects of gender, race, economic status, religion, and government on sport. It also offers a detailed look at both ethics and deviance in sport.

Social Issues in Sport, Fourth Edition, provides the foundations for critically examining the multifaceted roles of sport and physical activity in society. The information and activities offered by the text invite students to evaluate the sociocultural issues intertwined with sport and relate these themes to their own lives. Through this in-depth examination of sociocultural issues, students will be able to understand and appreciate the development of sport as a part and reflection of our society.

Note: A code for accessing HKPropel is included with all new print books.

Ronald B. Woods, PhD, is an adjunct professor of health science and human performance at the University of Tampa. He was a professor of physical education and men’s tennis coach at West Chester University in Pennsylvania for 17 years and was inducted into their Athletic Hall of Fame.

Woods also spent 20 years with the United States Tennis Association (USTA) and was the first director of player development charged with developing top junior players into successful playing professionals. He was honored by the International Tennis Hall of Fame with their Educational Merit Award in 1996. In 2010, Woods was inducted into the USTA Middle States Tennis Hall of Fame.

A lifelong member of SHAPE America, Woods was a member of the U.S. Olympic Coaching Committee for eight years and the Coaches’ Commission of the International Tennis Federation.

B. Nalani Butler, PhD, is an assistant professor of sport management at Kennesaw State University. Butler is a former college student-athlete who continued her scholarly journey until she completed her PhD at the University of Tennessee at Knoxville. During her tenure in Knoxville, she volunteered her time as a graduate student representative for the Center for Sport, Peace, and Society, which works closely with the U.S. State Department on issues involving sport diplomacy. More recently, Butler’s international experience involves being a part of the International Olympic Academy’s International Session for Educators, where she works with scholars around the world to develop communication and understanding with using sport as a vehicle for peace and understanding.

Butler’s past experiences in the sport industry include working with the Cincinnati Reds (MLB) team, USA Bobsled and Skeleton, the Georgia State University Athletic Department, and the Southern Intercollegiate Athletic Conference (SIAC). She is an editorial board member of Engaging Sports and on the Board of Commissioners for the Commission on Sport Management Accreditation (COSMA). Butler’s experiences working, traveling, and playing sports have helped her to shape a scholarly professional trajectory, focused on exploring social issues in sport, locally and globally.