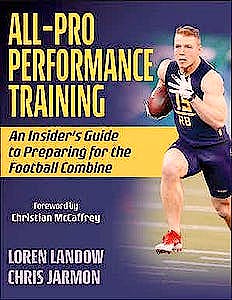 All-Pro Performance Training. An Insider's Guide to Preparing for the Football Combine

Very few athletes are invited to a combine. Whether they are elite high school athletes vying for a college scholarship or standout college players looking to catch the eye of NFL scouts, only the best of the best get the chance to showcase their abilities in the unique environment of the combine, where a fraction of a second can make or break an athlete’s dream to play at the next level.

With a foreword by Christian McCaffrey, Carolina Panthers running back and Landow Performance client, the text breaks down the proper execution of combine staples such as the 40-yard dash and pro-agility shuttle. It offers tips for mastering position-specific agility drills, and it provides an inside look into how athletes at the highest level of the sport both train and recover.

Proven techniques for mastering position-specific agility drills will help players hone their biomechanical movement efficiency, reduce the risk of injury, and open scouts’ eyes. And Prep Like a Pro sidebars put you right on the field with the author, revealing the most advanced training regimens and technological tools used by elite coaches and athletes.

Equip your athletes to reach their full potential. With All-Pro Performance Training, strength and conditioning coaches, personal trainers, and motivated athletes have the definitive playbook for training with purpose, elevating their game, and performing at their peak at combine time.

Loren Landow, CSCS *D, has been a sports performance coach for over two decades. He joined the Denver Broncos staff as head strength and conditioning coach in 2018 after spending 10 years as the owner and director of Landow Performance, a training facility in Centennial, Colorado. During his 20 years coaching in the private sector, he designed and led a training program to prepare prospective pro football players for their combines and pro days, including more than 20 NFL Draft first-round picks.

Landow has coached thousands of athletes over the course of his career, including more than 700 professional athletes associated with the NFL, NHL, MLB, UFC, WNBA, and Olympics. In addition to his expertise on biomechanics and maximizing athletic performance, he is renowned for his emphasis on injury prevention and rehabilitation. He developed the ACL prevention program and the ACL return-to-sport protocols for the world-renowned Steadman Hawkins Clinic.

Landow has been a keynote speaker at the conferences of NSCA in the United States, ASCA in Australia, SPRINZ in New Zealand, and UKSCA in the United Kingdom. He is the author of two other books, My Off-Season With the Denver Broncos: Building a Championship Team (While Nobody’s Watching) and Ultimate Conditioning for Martial Arts.

Prior to his career in the sports performance field, Jarmon worked at ESPN for four years as a content associate, traveling with ESPN production crews to work behind the scenes on live sporting event TV broadcasts, including Monday Night Football, the NFL Draft, the X Games, MLS matches, and the FIFA World Cup.