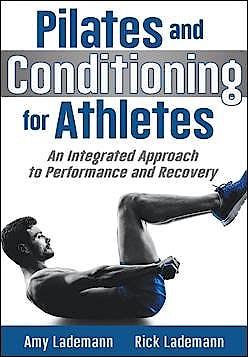 Pilates Conditioning for Athletes. An Integrated Approach to Performance and Recovery

Glossary
About The Authors

Gain the competitive edge with the innovative training methods in Pilates and Conditioning for Athletes. This science-based, multidimensional approach to athletic conditioning helps you build a strong and flexible foundation by infusing Pilates into training, resulting in complete training programs that tap into the seven pillars of training needed for success:

Begin with proven assessment protocols that have helped elite and professional athletes reach the pinnacle of their careers and remain there. Evaluate your movement patterns, range of motion, strength base, flexibility, and core strength to determine your baseline and guide your selection of exercises and sequences to turn weaknesses into strengths.

Then follow detailed instructions for 123 Pilates mat and traditional conditioning exercises to strengthen your core, improve your posture, increase flexibility, and correct muscle imbalances. You will learn the following:

You can take the confusion out of your training plan by adding one or more of the 13 foundational, intermediate, and sport-specific workouts to help you achieve your performance goals.

Successful athletes never leave their training to chance: Every workout is planned, every exercise is done for a specific reason, and each movement and program builds upon the previous one. Whether you are a weekend warrior, a college or professional athlete, or a 70-year-old triathlete, Pilates and Conditioning for Athletes will help you incorporate Pilates training to become a stronger, faster, healthier, and better-equipped athlete.

Amy Lademann, PMA-CPT, and her husband, Rick, are the founders of Beyond Motion, a state-of-the-art performance facility in Naples, Florida. Beyond Motion is designed to combine the worlds of athlete performance and Pilates. Since 2009 Amy and Rick have been recognized as leaders in the industry.

Amy danced as a child. At 16 she began her fitness career by becoming certified in aerobics and step aerobics. Her passion for fitness fueled her quest for knowledge, and throughout the next two decades she completed instructor training in the Nia Technique, Bellatone, Barre, Zumba (and other dance fitness programs), and yoga. Unfortunately, Amy developed very severe sciatica and back issues. After trying everything to alleviate her discomfort, she discovered Pilates and was instantly hooked: Pilates was the one thing that finally helped heal her pain. She began her Pilates career with Polestar in 2001 and continued her education in a variety of contemporary Pilates methods, including instructor training in MOTR and Bodhi through Balanced Body. In 2016 Amy partnered with the esteemed Pilates Education Institute to create Beyond Motion’s comprehensive Pilates Teacher Training Program. She has been nicknamed the Teacher’s Teacher by her students.

In 2017 Amy competed in her first figure and bikini competitions through the National Gym Association (NGA), a drug-free bodybuilding organization. At her first competition, she won first place in Figure Debut (first-time competitors), Figure Masters (competitors over 35 years old), and Figure Open (every age and level), and she won second place in Bikini Open. She also earned her pro card (meaning she can compete at the professional level) in figure competitions. In 2018 she competed again on an even larger stage and earned second place and third place in her divisions. Striving to improve herself is just as important to Amy now as it was when she began all those years ago.

Rick Lademann began working for Al Vermeil and the world champion Chicago Bulls while in his 20s. After three years, he headed to Colorado Springs, where he worked for USA Weightlifting under the care of former Romanian Olympic weightlifter Dragomir Cioroslan. Rick lived on the United States Olympic Training Center campus for two years and was instrumental in developing the junior squad and programming volume numbers for our Olympic athletes.

He then further expanded his career when he went to the U.S. Air Force Academy, also in Colorado, to assist the football team with their speed and strength program. During this time, he also worked with the USA Figure Skating team in Colorado Springs.
Next, Rick worked with internationally recognized orthopedic surgeons at the Steadman Hawkins Clinic as the strength and conditioning consultant. At the clinic Rick handled post physical therapy on their professional athletes, including the Colorado Rockies players. This led to the opportunity to become the primary performance coach for baseball player Larry Walker, the only Rockies player to ever win the National League MVP award. Even famed sportswriter Ken Rosenthal noticed a change in Walker’s performance after Rick began his work, stating that the program Rick created made such a difference in Walker’s performance that it was evident from the start of spring training.

Rick then served as the strength coach at the University of California at Berkley, where he was instrumental in helping the rugby team win a national championship in 2003. In addition to rugby, Rick served the men’s and women’s tennis, baseball, and basketball teams.