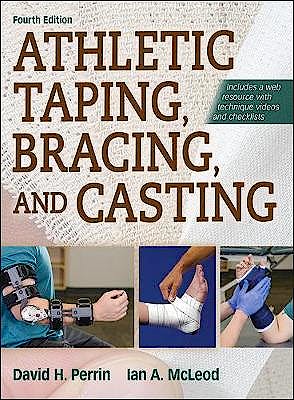 Chapter 6. The Elbow and Forearm
Elbow Sprains
Elbow Hypertension
Epicondylitis of the Humerus
Fractures of the Forearm

Glossary
Bibliography
About the Authors

The premier text for athletic taping and bracing is back in a stunning fourth edition. Newly expanded to cover casting techniques, Athletic Taping, Bracing, and Casting, Fourth Edition With Web Resource, continues to set itself apart from the pack with superior photos and illustrations, precise step-by-step instructions, and pinpoint focus on the techniques that athletic trainers and therapists are most likely to apply in clinical practice.

Author Ian McLeod joins veteran author David Perrin in this fourth edition to lend further expertise in the application guidelines and precautions for casting and splinting. Additional enhancements include the following:

Athletic Taping, Bracing, and Casting, Fourth Edition, features more than 650 full-color illustrations and photos demonstrating the most frequently applied procedures in clinical practice, some of which are broken down into as many as 16 steps. The book follows a systematic approach for each major joint and body region, covering traditional taping as well as rigid strap taping, elastic kinesiology taping, and techniques for immobilization with casting and splinting. The photos that depict taping sequences feature tape with darkened edges that enable readers to distinguish the layers and patterns of the tape applied in each step, providing invaluable visual aids for both students and professionals. In addition, icons in the text will indicate when a technique is also demonstrated in the companion online video.

With its concise anatomical descriptions and detailed anatomical illustrations similar to those normally found in advanced texts on anatomy, Athletic Taping, Bracing, and Casting clearly highlights the mechanisms of injury that are crucial for understanding effective taping, bracing, and casting. To further support the practice, the book also presents basic stretching and strengthening exercises for injury rehabilitation. These exercises are illustrated for each body part and can be used in conjunction with the taping, bracing, and casting techniques to prevent injury and help rehabilitated patients maintain strength and flexibility and safely return to play.

The clear instructional guidance and robust visual support offered in Athletic Taping, Bracing, and Casting, Fourth Edition, will allow both future and current athletic trainers to build proficiency—and then mastery—of the performance of these techniques.

Web resource with online video. Features 56 competency testing checklists detailing the steps for each technique. Instructors can use these checklists during practical tests to ensure students are mastering the most common procedures they will likely encounter in their career. The online video features demonstrations of proper positioning and technique, including six clips dedicated to casting.

David H. Perrin, PhD, FNATA, has over 40 years of experience as an athletic training educator, clinician, and researcher. He is dean of the College of Health at the University of Utah and a professor of physical therapy and athletic training. He previously served at the University of North Carolina at Greensboro—first as dean of the School of Health and Human Performance from 2001 to 2007 and then as provost and executive vice chancellor from 2007 to 2014. Prior to that, Perrin directed the athletic training education program at the University of Virginia from 1986 to 2001. His awards and honors from the National Athletic Trainers’ Association (NATA) include the Sayers “Bud” Miller Distinguished Educator Award, the Most Distinguished Athletic Trainer Award, the William G. Clancy Medal for Distinguished Athletic Training Research, induction into the NATA Hall of Fame, and the NATA Research and Education Foundation Lifetime Contribution Award.

Perrin is a fellow of the American College of Sports Medicine and a fellow of the National Academy of Kinesiology. For 13 years, he was also a member of the NATA Professional Education Committee, helping to write the guidelines for accreditation of both undergraduate and graduate athletic training education programs. In 2011, Perrin was elected a fellow of the National Athletic Trainers’ Association. He was editor in chief of the Journal of Athletic Training from 1996 to 2004 and was the founding editor of the Journal of Sport Rehabilitation. He is author of Isokinetic Exercise and Assessment and Athletic Taping and Bracing, editor of the third edition of The Injured Athlete, and coauthor of Research Methods in Athletic Training.

In his free time, Perrin enjoys traveling, running and cycling, and vacationing at his lake cottage in Vermont.

McLeod’s expertise includes athletic training, sports medicine, and primary care. He is a member of the Arizona State Association of Physician Assistants, Arizona Athletic Trainers’ Association, National Athletic Trainers’ Association, and American Academy of Physician Assistants. He has extensive experience working with world-class athletes, particularly swimmers. McLeod was a member of the U.S. team’s medical staff at the 2008 Summer Olympic Games in Beijing. He remains involved with USA Swimming's High Performance Network and has been given the organization's highest honor, the Gold Standard Award. He is the author of Swimming Anatomy.