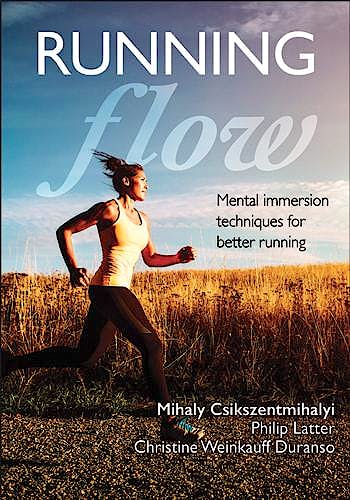 Ask any serious runner and they’ll tell you that being mentally sound is vital to success in the sport. The ability to enter a flow state of mind is something that Dr. Mihaly Csikszentmihalyi has devoted his entire career to understanding.

In Running Flow, Dr. Csikszentmihalyi is joined by fellow psychologist Christine Weinkauff Duranso and running journalist and coach Philip Latter. This landmark work is the first book dedicated to helping runners achieve the state of flow in competitive and training environments. You’ll find comprehensive coverage of the phenomenon, unique practice exercises that stimulate its occurrence, and firsthand accounts from elite runners about their flow experiences.

The psychological barriers associated with training and competition can be as demanding as the physical ones. Destined to become a running classic, Running Flow will open your mind not only to better performance but also to a better, healthier, and more enjoyable experience.

Mihaly Csikszentmihalyi is a bestselling author, world-renowned researcher, and one of the fathers of positive psychology. His seminal work, Flow: The Psychology of Optimal Experience (1990), was a New York Times best seller and introduced the concept of flow to mainstream audiences. Once the head of the psychology department at the University of Chicago, Csikszentmihaly founded the Quality of Life Research Center at Claremont Graduate University. His work has influenced figures such as Bill Clinton and former British Prime Minister Tony Blair.

Now a professor at Claremont Graduate University in southern California, Csikszentmihalyi has written more than 120 journal articles and book chapters and has authored a dozen books related to positive psychology. He continues to research flow and motivation as the founder and codirector of the nonprofit Quality of Life Research Center. He lives in Claremont, California.

Philip Latter is the coauthor of Faster Road Racing (Human Kinetics, 2015) with two-time Olympian Pete Pfitzinger. A former senior writer for Running Times and current contributor to Runner’s World and runnersworld.com, Latter has profiled more than a dozen Olympians and written extensively on training methodology, exercise science, and sport psychology. He regularly lectures on flow at summer running camps and has used many of the techniques described in this book with the high school, college, and post collegiate athletes he coaches.

A runner for almost two decades, Latter earned five all-conference honors at the University of North Carolina at Asheville and holds personal bests of 14:47 for 5K, 31:24 for 10K and 1:12:11 for the half marathon. A former NCAA Division I head cross country coach at Radford University, Latter coaches runners at Brevard High School in the Blue Ridge Mountains of western North Carolina. He lives just outside of Brevard with his wife and two daughters.

Christine Weinkauff Duranso is a professor of psychology at both Woodbury University in Burbank, California, and California State University at San Bernardino. As a PhD student at Claremont Graduate University, Weinkauff studied under the mentorship of Mihaly Csikszentmihalyi and focused her research on the role of flow and exercise and how they contribute to thriving. Her dissertation considered how exercise, flow, and nature strengthen resilience and enhance well-being for college students.

Weinkauff has completed races ranging from 5K to marathon distance and has ventured into the triathlon world. She enjoys speaking to various groups about the role of flow and exercise in well-being and how flow can provide the motivation to persist in new exercise endeavors. A mother of four, she lives in Claremont, California, with her three youngest children.