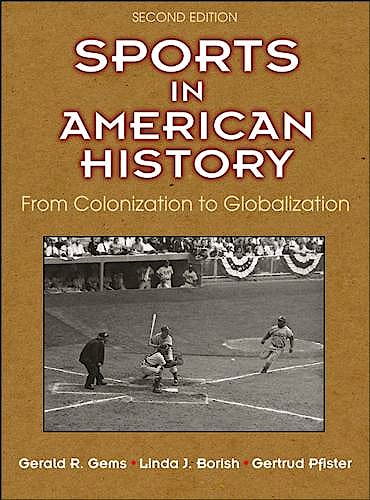 Sports in American History. From Colonization to Globalization

Sports in American History: From Colonization to Globalization, Second Edition, journeys from the early American past to the present to give students a compelling grasp of the evolution of American sporting practices. This text provides students with insights into new and alternative perspectives, examines sport as a social and cultural phenomenon, generates a better understanding of current sport practices, and considers future developments in American sport.

This comprehensive resource delivers coverage of sport by historical periods—from the indigenous tribes of premodern America, through colonial societies, to the era of sport in the United States today. Sports in American History, Second Edition, examines how women, minorities, and ethnic and religious groups have influenced U.S. sporting culture. This gives students a broader knowledge of the complexities of sport, health, and play in the American experience and how historical factors, such as gender, ethnicity, race, and religion, provide a more complete understanding of sports in American history.

Sports in American History, Second Edition, is unique in its level of detail, broad time frame, and focus on sports and the evolving definitions of physical activity and games. In addition, excerpts from primary documents provide firsthand accounts that will not only inform and fascinate readers but also provide a well-rounded perspective on the historical development of American sport. With sidebars offering an international viewpoint, this book will help students understand how historical events have shaped sport differently in the United States than in other parts of the world.

Influence of Religion on English Colonists

Chapter 2. Sport and Pastimes in the American Revolutionary Era and Early National Period, 1750–1820

The Great Awakening and the Place of Sport

The Enlightenment in America and Ideas of Sport and the Body

Turn of the Nineteenth Century and Societal Patterns

Overview of the Antebellum Period

Rise of Agricultural and Sporting Journalism

Sporting Practices of the Middle and Upper Classes

Public Spaces for Health and Sport

Subcommunities and the Growth of Modern Sport

The Civil War and Sporting Experiences

Development of an Intercollegiate Sporting Culture

Regulation of Sport: Amateurism Versus Professionalism

Social Reformers of the Progressive Era

Play and Games in American Ideology

Sport, Ethnicity, and the Quest for Social Mobility

Sport During World War I

War, Depression, and the Shaping of America

Social Change and the Spread of Sport

Heroes in the Golden Age

Media and the Commercialization of Sport

Sport in the Cold War

Evolution of the Sport–Media Relationship

Sport and the Civil Rights Movement

Sport, Narcissism, and the Existential Search for Self

Scientific Advancements and the Growth of Sport

Michael Jordan and the Growth of Professional Basketball

Intercollegiate Sport and the NCAA

Drug and Body Abuse Among Athletes

Discrimination at the End of the Twentieth Century

Rise of the Runner

The Future of Sport

Afterword
Bibliography
Index
About the Authors

Gerald R. Gems, PhD, is a professor in the kinesiology department at North Central College in Naperville, Illinois. Gems serves on the Executive Council and Scientific Committee of the International Society for the History of Physical Education and Sport and is a past president of the North American Society for Sport History. He presented the 2016 Routledge Keynote where he received the Routledge Prize in Sport History.

Dr. Gems is an international scholar and the author of more than 200 publications, including 18 books. He was president of the North American Society for Sport History (NASSH) from 2003 to 2005 as well as the book review editor of the Journal of Sport History for more than two decades. He also received the Fulbright Senior Specialist Award for 2007 to 2012 and was an Illinois Roads Scholar in history from 1999 to 2003.

Dr. Gems earned his PhD in sport history at the University of Maryland. In addition to his role at North Central College, Dr. Gems serves as the vice president for the International Society for the History of Physical Education and Sport (ISHPES).

Linda J. Borish, PhD, an associate professor of history and gender and women’s studies at Western Michigan University and is jointly appointed in the departments of history and gender and women’s studies. Dr. Borish has focused her research on American women’s sport and health history. Her research has appeared in both national and international publications. She is lead editor for The Routledge History of American Sport (Routledge, 2016), and was selected in 2001-2002 as the International Ambassador for the North American Society for Sport History and also served on its Executive Council and Publications Board. She is executive producer and historian of the documentary film Jewish Women in American Sport: Settlement Houses to the Olympics and has received numerous research grants related to American women and sport history in rural and urban contexts. Borish was the book review coeditor of the Journal of Sport History from 1996 to 2000.

Dr. Borish earned her PhD in American studies from the University of Maryland at College Park. In addition to her role at Western Michigan University, Borish is a research associate at the Hadassah-Brandeis Institute, Brandeis University.

Gertrud Pfister, PhD, is a professor at the University of Copenhagen in Denmark. She has earned PhDs in sport history and sociology at the University of Regensburg and the Ruhr-University Bochum. She was president of the International Sport Sociology Society from 2001 to 2007. Pfister was also president of the International Society for the History of Sport and Physical Education from 1993 to 2000 and won the association’s award for lifelong achievements in the area of sport history in 2005.

She won the Darlene Kluka Award of the Women`s Sport Foundation in 2006, the Award of the European Working Group Women in Sport in 2009, the Dorothy Ainsworth Research Award of the International Association of Physical Education and Sport for Girls and Women (IAPESGW), and the Els Schröder Award of the German Gymnastic Association (DTB) for research on women and sport 2013.

Pfister earned honorary doctorates at the Semmelweis University in Budapest 2007 and at the University of Malmö in 2013.

She received the Order of the Dannebrog, as a knight 1. Class, from the Danish queen in 2015 and the Order of Merit of the Federal Republic of Germany, 1. Class, in 2016.

Pfister is a fellow of the American Academy of Kinesiology and Physical Education and the European College of Sport Science.